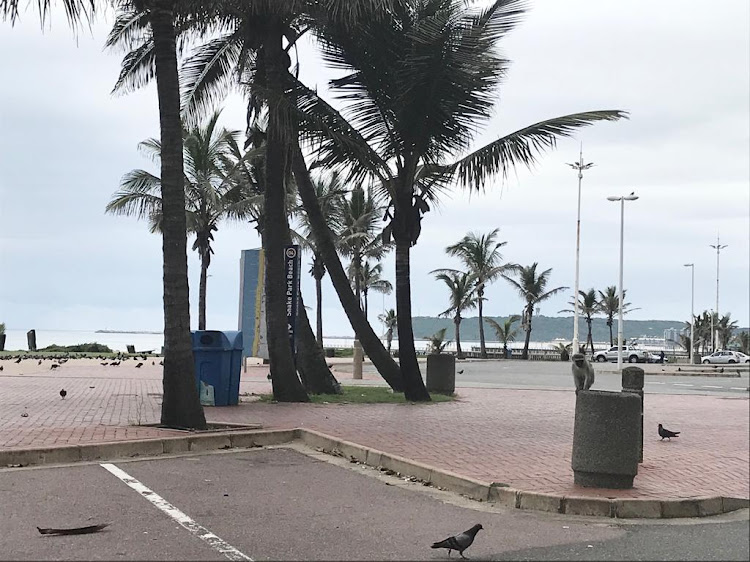 Durban's beachfront, which is usually crammed with early morning joggers and cyclists, was packed with pigeons and a lone monkey on Friday morning, hours after the country started a 21-day lockdown.
Image: Yasantha Naidoo

The “semi-bald” man jogging along Blackburn Road in Durban North, the woman jogging on Lindsay Drive and the dog walker on Umhlanga beach ... Twitter and Facebook see you.

Just five hours into the national lockdown, Durban residents took to social media to shame those who ignored the restrictions on jogging and dog walking.

Most of the culprits were spotted in the upmarket northern suburbs.

“To the semi bald white male who just took himself for a walk or jog along Blackburn Road, stop being a covidiot. This is not a drill. We are in lockdown,” one user wrote on a Durban North community page.

Another user said it was pity there were no police around to arrest a jogger in Lindsay Drive. Other users suggested that she throw rotten tomatoes at the jogger.

Durban metro police spokesperson Superintendent Boysie Zungu could not confirm if there had been any arrests of joggers or dog walkers since the start of the lockdown.

Meanwhile, the Durban beachfront, which is usually packed with early morning joggers and cyclists, was deserted save for hundreds of pigeons and a lone monkey.

Two metro policemen at a roadblock at the entrance to the Marine Parade said people had respected the call to stay at home.

“People are staying in their flats on the beachfront. It is day one but we may see a different picture after two or three days. I am sure they will be feeling very claustrophobic,” one policeman said.

“It's only natural, but we have to respect the president's decision for the sake of our health.”

Buhle Samuels hits back after being dragged for 'Covid-19 sarcasm'

Buhle Samuels' attempt at humour during these uncertain Covid-19 times has backfired.
Pic of The Day
2 years ago

At least two cabinet ministers are self-isolating after an official who accompanied them on a trip to DRC two weeks ago has tested positive for ...
News
2 years ago
Next Article