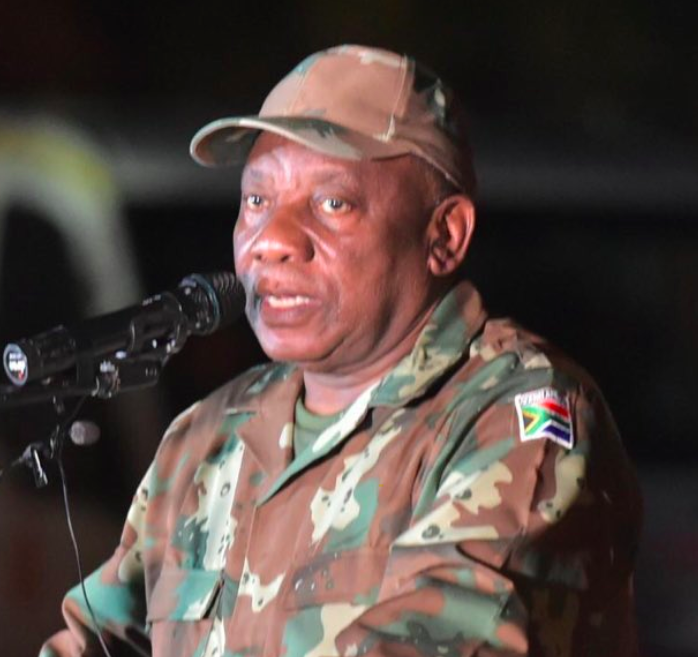 As Commander-in-Chief of the country's armed forces, President Cyril Ramaphosa wore a camouflage overall when he addressed members of the defence force ahead of the 21-day lockdown.
Image: Presidency via Twitter

There was “nothing wrong” with President Cyril Ramaphosa addressing soldiers while wearing military uniform.

Ramaphosa wore camouflage clothing on Thursday night when speaking to the SA National Defence Force (SANDF) ahead of their deployment to help keep order during the national lockdown.

“The president is the Commander-in-Chief of the armed forces, and there is nothing wrong with him wearing the uniform of the SA National Defence Force.

“The uniform the president was wearing was his camouflage overall. That uniform is worn when you know that you’re going to work,” said Mapisa-Nqakula.

Ramaphosa displaying the mettle we expect

There can be no doubt that since the outbreak of Covid-19, President Cyril Ramaphosa has displayed the kind of leadership many South Africans expect ...
Opinion
2 years ago

Army officially tasked to hit the streets to stop Covid-19

The army will at midnight roll onto the streets of SA armed with protective gear, including face masks, to join the frontline battle against ...
News
2 years ago
Next Article