Displaced by floods, Mamelodi victims now in fear of hunger during Covid-19 lockdown 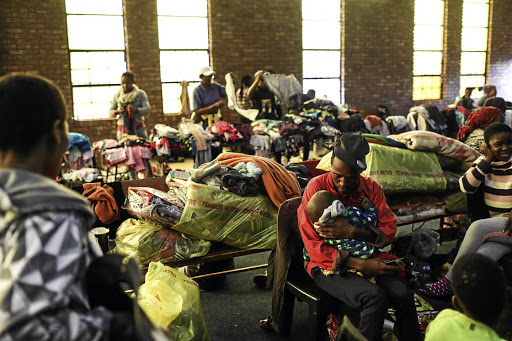 Residents affected by flooding who were seek refuge at the Mamelodi Baptist Church said they were anxious about the lockdown.
Image: Alaister Russell

Dozens of displaced Mamelodi flood victims have expressed fear and anxiety at the start of the national lockdown while they are still confined to community halls and churches without enough food and soap.

Many of the families say they did not have enough cleaning materials, masks, gloves and sanitisers for the 21 days of the national lockdown to prevent the spread of the coronavirus.

Residents, who spoke to Sowetan yesterday, said they only found out about President Cyril Ramaphosa's announcement on the lockdown through social media as they don't have television or radio sets.

At Nellmapius community hall, a few women were busy cleaning the hall using only water, as the one available large green bar soap was being shared by women and children for bathing and washing hands.

One of the women, Catherine Dimo, said: "We welcome the announcement made by the president of the country but we don't have soaps to bath ourselves, to wash clothes or even to clean the environment we live in.

Municipal offices in Mamelodi West, east of Pretoria, have been forced to shut down for two days due to protests by residents of a local informal ...
News
2 years ago

'We will take their land'

Dispute over stands for flood victims.
News
2 years ago

"There are no sanitisers and no food and anyone can come into the hall coughing... others are coughing badly."

Dimo said the situation at the hall was not conducive to avoid the possible spread of the coronavirus as 54 people, including children, men and women, share the same hall that is often dirty.

"I don't know how will I survive the lockdown because they gave us one sanitiser for 54 people to last for 21 days and we are running out food and people are making plans to get food on their own," Khoza said.

At another community facility, the Stanza Bopape hall in Mamelodi East Extension 5, Mpho Masombuka said 13 adults and seven kids share one living space without any cleaning material, including soap.

"We are also only left with eight rice packs and nine maize meal [bags] and we don't know if that it will last us for the next 21 days of the lockdown," said Masombuka

However, those housed at the Baptist Church in Mamelodi West were slightly positive as they seemingly had all they needed.

Thulani Ndlovu said they were confident that the lockdown will come and go without any hassles for them because they have enough food from previous donors and all 60 people in the church have their own sanitisers.