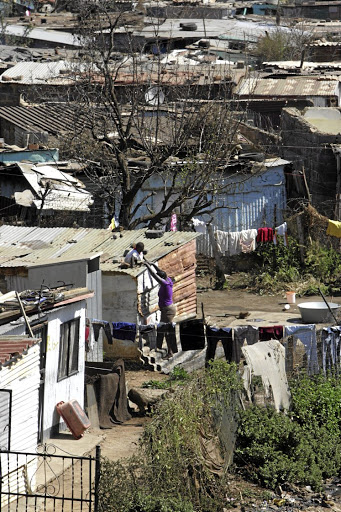 The government says it would be difficult to curb the spread of diseases such as Covid-19 in densely populated areas. /ANTONIO MUCHAVE

Government is embarking on extraordinary mass removals of people from highly congested informal settlements in an attempt to curb the rapid spread of the coronavirus outbreak.

This was announced by human settlements, water and sanitation Minister Lindiwe Sisulu in Pretoria yesterday as the country prepares for a national lockdown which kicks in tomorrow at midnight.

Sisulu said government's plans show that there would be difficulties in providing health and emergency services to the congested areas should a large number of people contract the virus which has infected a confirmed 554 people in SA.

She said the congested informal settlements had already been identified as areas that could hamper the fight against the pandemic.

Sisulu said it would almost be impossible to assist people should the virus spread to communities in the identified informal settlements.

"And when you look at the density of our people and the fact that our emergency laws indicate that you cannot have 100 in a room, imagine what our informal settlements are and these are among the poorest of the poor with no possibility of getting out of that situation."

Hundreds of South Africans flocked to major retail stores yesterday in panic to stock up on items they think will be essential when the nationwide ...
News
1 year ago

Sisulu added: "The other reason we have to de-densify is because should there be a further spread of the virus in our informal settlements, an ambulance can't go there, a car can't go there. How do you take anybody to hospital?

Sisulu said the government had identified land in the four provinces where people removed from informal settlements would be moved to. Even though she couldn't give timelines, Sisulu said the relocations were considered urgent.

"We want to persuade our people to take an option of moving there on their own."

Sisulu said they ideally would want to complete the task within the 21-day national lockdown period but were weary of committing to the timeline.

Sisulu said the government was working with the Council for Scientific and Industrial Research and the Independent Electoral Commission who have databases of people in these areas.

She said should communities warm up to the idea, the removals would start with the elderly.

"This will be an ongoing consultation with our communities. We don't want to be prescriptive, we want to advise and provide what is in their best interest," Sisulu said.

"I want them to grab this opportunity so that they, like anybody else who has a right to house, have a comfortable house so that when there is a lockdown there is one family that is in lockdown and they can protect each other. Right now it's a dire situation."

The country will go under a national lockdown from midnight on Thursday as a measure to curb the spread of coronavirus.
News
1 year ago

Their work involves lots of touching, and social distancing isn't possible. During the time of Covid-19, business is down for sex workers and ...
News
1 year ago
Next Article