LISTEN | 'The 21 days are going to be really hard': delivery motorcyclists on lockdown 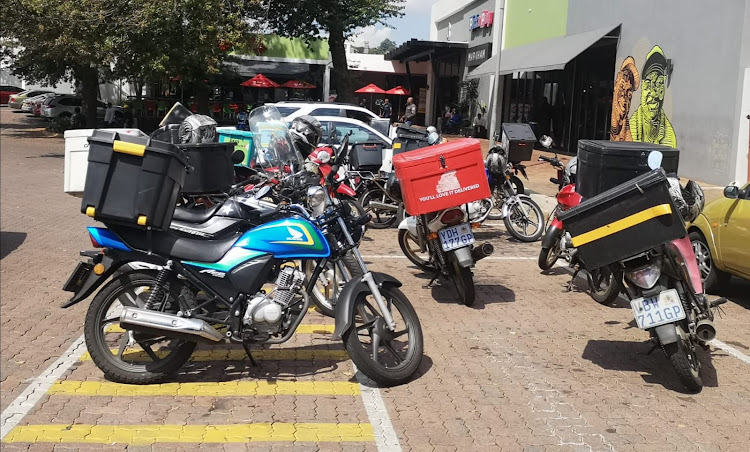 Several motorbike riders who work for food delivery services said it was not clear whether these services would be operational during the nationwide lockdown, and they feared they would lose their incomes.
Image: Andisiwe May

Motorcycle riders in Johannesburg were unsure on Tuesday how the looming lockdown would affect their incomes as providers of food delivery services.

President Cyril Ramaphosa announced the lockdown on Monday, explaining that essential services personnel would be the only ones exempted, including police officers, health care workers and those involved in the supply of goods, including food.

Tinashe Phiri, who is contracted under Uber Eats, said he heard about the lockdown on the news but had no idea what it meant for him. He said that business has already gone down drastically.

Listen to what the drivers have to say:

Phiri said during an average busy week, he used to make 90 deliveries, but since the coronavirus pandemic it was down five to seven deliveries a day.

“Coronavirus is affecting everything. The business is really down. Some of us get paid daily for every delivery we make,” he told TimesLIVE.

Phiri said he had been battling to make ends meet for his two children and wife as his income had changed unexpectedly. He fears what the lockdown will bring.

“We have not been told anything by Uber Eats. We are worried things will get worse for us,” he said.

Another driver, Faisal Kaddu, falling under the Takealot delivery group, said his employer told all drivers they would stop working on Thursday.

“We thought we would continue serving people because by delivering food we are giving a service which people need, but unfortunately we were commanded to shut down. We have to wrap up,” he said.

Kaddu said he had also seen a decline in the number of orders since the pandemic had reached SA.

In a statement released last week, Takealot instructed drivers not to make physical contact with any customers and to maintain a safe distance.

“Packages will be placed on a surface indicated by the customer. The driver will then back away and allow the customer to pick up their package themselves.”

“The next 21 days are going to be really hard for us. Right now I have about R200. I don’t know if it will last me until then,” said Kaddu.

Driver Botego Moloi, also of Uber Eats, said paying essentials such as rent and food has become difficult since the outbreak.

“We can’t make money at all. We don’t know if we will be working or not. If we don’t work, I don’t know how I will support my family.”

When Ramaphosa recently declared a state of disaster, Moloi said he had hoped to earn more because most people were expected to be home, but many orders came in during lunch time and mostly from office-based customers.

“It’s bad, coronavirus is affecting everything,” he said.

The country will go under a national lockdown from midnight on Thursday as a measure to curb the spread of coronavirus.
News
2 years ago

Civil rights group the Organisation Undoing Tax Abuse (Outa) and the Congress of the People (Cope) have welcomed President Cyril Ramaphosa’s ...
News
2 years ago
Next Article