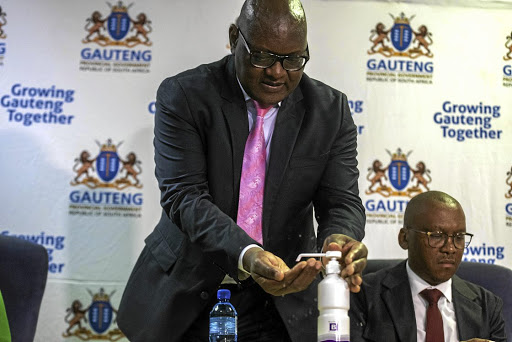 Gauteng premier David Makhura during a media briefing on the enforcement of measures to curb Covid-19. /Alet Pretorius/ Gallo Images

The Gauteng government is ready to enforce the 100-people gathering ban.

Premier David Makhura in Midrand, Johannesburg, yesterday announced that people who were planning weddings or have funerals would have to apply for permission at their nearest police station.

"We want every group in society to be complying that there should be no people more than 100 who gather in any parts of the province. The good thing is that there is a very positive response from different groups in society," Makhura said.

He said government would not hesitate to shutdown churches or any establishments that were not complying with the ban announced by President Cyril Ramaphosa on Sunday.

"It's something we will do, I must say that we will do that but we prefer to say to various sectors of society, we prefer to work with you to protect ourselves," Makhura said.

Authorities are meanwhile collecting information on 14 coronavirus infections that were locally transmitted as the number of confirmed cases increase.

As at yesterday, 14 of the 116 people have been confirmed to have tested positive for the virus without having travelled internationally.

Gauteng accounts for 52% of the total tally of confirmed cases in the country.

Previously, the cases were only of people who had travelled to high-risk areas such as Italy, Austria and the United Kingdom.

The health department is collecting information on how the 14 people could have been infected.

"As part of tracking and tracing, we have collated background information on how these patients were infected," health minister Zweli Mkhize said.

"We will provide information to the public, so as to give a sense of how these local transmissions occurred."

Mkhize said that they would be disclosing further information [later] as they are bound by patient confidentially.

An announcement on the details of the local transmissions, likely by Ramaphosa, is expected to be made today.

Of the local transmissions, eight are in Gauteng, three in KwaZulu-Natal, one in Mpumalanga and two in the Western Cape.

Gauteng health MEC Bandile Masuku said there was no vaccine for the novel Covid-19 and said that anyone who claims otherwise should not be taken seriously.

He said this as Ekurhuleni mayor Mzwandile Masina told a council meeting yesterday that the municipality was going to use some of its emergency funds to procure vaccine from Cuba.

"Currently, you know, we have to be clear that there is no vaccine against this virus and it should be known to everybody," Masuku said.

"So when people talk about vaccines we need to talk about it with tongue in cheek. We have seen several countries announcing their 'discoveries' but we know in terms of facts from the World Health Organisation that we're almost six months to a year away from a registered vaccine."

There are currently no confirmed cases in the Free State, Eastern Cape, North West and Northern Cape.