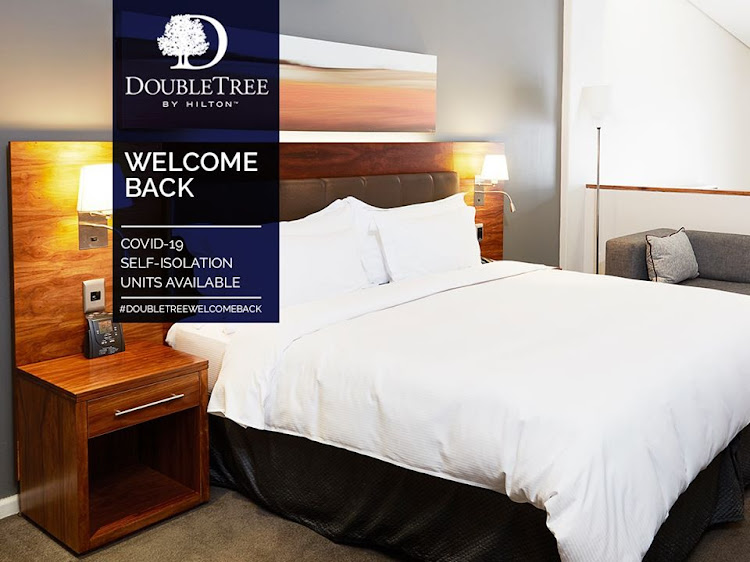 President Cyril Ramaphosa, in declaring a national state of disaster, stopped flights and revoked tourist visas to visitors from high-risk countries. With the travel industry in trouble as a result, one Cape Town hotel has made a last-minute attempt to fill its beds.

Ten days ago, Doubletree Hilton in Woodstock was fully booked for weeks to come. But on Tuesday, cancellations meant only 25% of its rooms were occupied - mostly by tourists stranded in SA after their home countries went into full lockdown.

As South Africans make their way home, however, the hotel saw a lifeline that could keep the lights on at least for the next 14 days.

Its largest rooms are now being sold at a discount as “self-isolation units” for South Africans returning from abroad.

According to Francois Steyn, hospitality asset manager at management firm Spear, the idea is to recreate a “a little bit of home” while people wait out the mandatory 14 days of self-isolation for South Africans returning from high-risk countries.

“We’ve got a small window of opportunity ... as the president said on Sunday evening, visas will be revoked and ports will be closed from certain destinations,” Steyn told SowetanLIVE's sister publication TimesLIVE on Wednesday.

“So, we’ve got a number of South Africans returning home and they’re flying in today. It’s very difficult in many instances for them to go home and to share space with family members.

“Many of the times, family members are maybe elderly or they have a history of respiratory problems or they’ve had health issues before.”

A certain number of the larger rooms will be blocked off to provide a more pleasant experience while the guests stay in “complete isolation”.

“There will be literally no guest contact at all. Our priority is also to safeguard our staff,” said Steyn.

“Guests will come in. We will leave the key for them at a point of contact confirmed by telephone and they will pick up the key. They will go up to the room - the room door will be open, they will literally close the door.”

The usual hotel experience will then be a little different.

Guests are expected to wash their own cutlery, cups and glassware.

Cleaning kits will be provided and the rooms will also be stocked with “normal home pantry luxuries”.

“We will send breakfast up every morning on a tray. We will knock at the door and leave the tray in front of the door. They will open the door and take the food and then once they are finished, they will just leave the crockery and the tray,” said Steyn.

“Upon fetching the tray, it gets sprayed with antibacterial spray and sanitised before it gets picked up with gloves and gets taken down to the kitchen, straight into the dishwasher.

“All areas are disinfected, and all precautions taken. That will happen for 14 days. We will liaise with guests via telephone as well as e-mail. We’ve increased our concierge and guest liaison services.”

Steyn said the hotel had also increased the internet bandwidth so guests could stream and keep in touch with the outside world.

He said he was concerned for the tourism industry, and especially for restaurants and small businesses who depended on it for their survival as the “bottom has fallen out”.

Overseas, hotels have mothballed operations but Steyn says they were trying to keep the doors open to protect the jobs of 160 breadwinners.

“However, we dropped our prices quite considerably. We’re starting off by selling our larger rooms at R1,800 bed and breakfast per night. In normal circumstances some of those rooms will go up to R2,500 per night. It’s a substantial cut.

"What we want to do is to secure some revenue and make the wheels turn, albeit a little bit slower.”

He said an interest rate cut and a decision from municipalities to suspend payment of rates could help small businesses.

“We have to battle through and knuckle down, I fear for the small business. They have no backing, they live from day-to-day and they depend on the cash flow,” he said.

Steyn said events such as the Klein Karoo Nasionale Kunstefees (KKNK) in Oudtshoorn and the Knysna Oyster Festival were lifelines for small towns through the winter months.

The 25th KKNK, which was due to take place between March 23 and 30, is “not going ahead as planned” according to its website.

The chairperson of the festival's board, Crispin Sonn, said the festival had a large financial and social impact on the Oudtshoorn community.

“All roleplayers from the various sectors who will be affected by the decision – artists, festivalgoers who have already bought tickets, vendors and other partners – will be advised going forward,” he said.

“Different possibilities are on the table. The outcome will be decided by the national government’s guidelines and how the Covid-19 pandemic develops globally.”