Police officers fear plans for Covid-19 not acted upon 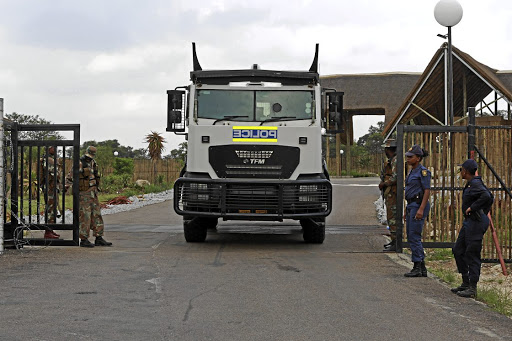 Police and soldiers on guard at The Ranch Resort near Polokwane in Limpopo, where 121 South Africans evacuated from China are in quarantine./ Thapelo Morebudi

Some police officers fear that they could be exposed to contracting the coronavirus because their work makes it harder to enforce social distancing.

Several officers who spoke to Sowetan yesterday after the declaration of the national state of disaster due to the outbreak of Covid-19, said they had received little support from the government to protect themselves. The officers said the police ministry was yet to provide clear plans to them on how they would be protected like all other citizens have been encouraged to take precautions.

A police officer who did not want to be named because he is not allowed to speak to the media said he was worried that they were more at risk of contracting the virus as the primary function of policing was interacting with the public.

"I don't know how we are going to work because if this continues to spread, we won't be able to stop it because we have to make physical contact with the suspects. What if they have this virus and we catch it?

"Some people are lucky because they can afford to work from home, but I'm a police officer. I don't have that luxury."

South Africans flown home from Wuhan all negative for Covid-19

In a rare piece of good news about the coronavirus pandemic, the health ministry has announced that all the South Africans who were flown home from ...
News
1 year ago

All Gautrain buses in Rosebank, Johannesburg, were cancelled on Tuesday morning after drivers raised concerns about Covid-19.
News
1 year ago

He said the South African Police Service had issued a communiqué to officers on the protocol that would be adopted.

"Management has told us our commanders need to ensure that we have masks and gloves on a daily basis. But we don't have them as yet so we don't know what's going to happen."

The internal communiqué seen by Sowetan was issued on March 14. It states that all stations, particularly community service centres and holding cells, should be equipped with disinfectants (big bottles).

"These should be placed at all reception areas and ablution facilities for continuous cleaning of hands."

The communiqué, signed by Lt-Gen Bonang Mgwenya, further said that masks and gloves for all members should be procured, while ordering the spring cleaning of cells with disinfectant every week.

Another officer stationed at OR Tambo International Airport said their issues were compounded by the lack of support and protection since the outbreak.

"We are some of the first people who are exposed to this virus because we are at the airport. I heard there was a directive from the national commissioner on a protocol that needs to be followed if we suspect that we have coronavirus but it has not been implemented. Our heads seem to not know what steps to take."

"Also, may I add that with regards to the handling of suspects, awaiting-trial prisoners, etc, a standard operation procedure (SOP) has been designed together with our colleagues from correctional services for the use of our members."

Richard Mamabolo of the Police and Prisons Civil Rights Union said there was growing concern that the protocols may fall short in some areas.

"It is of importance that these commitments are followed to the letter because within this criminal justice cluster, most requirements are physical contact with suspects, injured people within crime scenes and with communities."