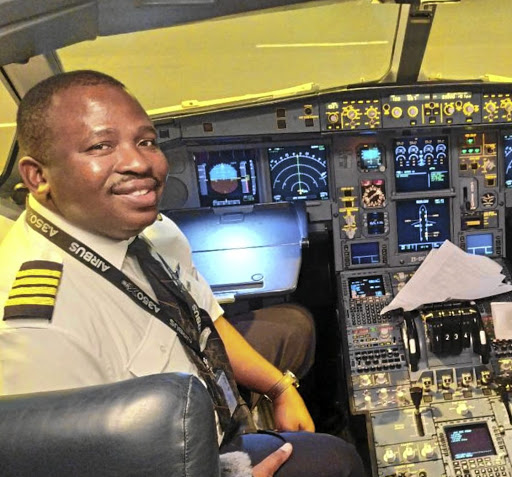 Capt Vusi Khumalo did not tell his eight-year-old daughter where he was going when he embarked on a mission to rescue more than 100 South Africans who were stuck in the epicentre of the coronavirus in Wuhan, China.

Khumalo, 54, the SAA chief pilot who brought 114 citizens back to the country on Saturday on board flight ZS-SND, cannot wait to leave the quarantine site in Limpopo to see last-born Khanya again.

"She had asked me if I'm going to China and I said, 'I don't want to lie to you but I will tell you where I went when I come back'. I could see the worry in her eyes," said Khumalo.

He was speaking to Sowetan yesterday from The Ranch Resort in Polokwane.

"My whole family was panicking because they thought I was going to go to China to die. They had lots of reservations about my mission but they eventually understood that I had to do it for my country," said Khumalo.

He said if he was in the same position he would have wanted a fellow South African to do the same without hesitation.

"I did it for my country together with the crew from the South African [National] Defence Force and department of health.

"I was in the front but they had to make sure that they did their part at the back to make sure we save as many South Africans as possible," he said.

Khumalo said the historic flight to China took more than 14 hours but they had to rest, restock and refuel in another country because they were not allowed to spend too much time in Wuhan.

"We were not allowed to take anything from China so we had to go to the Philippines first and rest there so we could prepare to go to Wuhan, where we took only two hours to board the passengers and headed straight back home to South Africa," he said.

Zim minister's bizarre coronavirus claim: 'It's to punish the West for sanctions'

Zimbabwe’s minister of defence and war veterans, Oppah Muchinguri-Kashiri, claims the coronavirus was unleashed by God to deal with US President ...
News
2 years ago

Khumalo, a father of six, said when they arrived in China, the country was on lockdown. "There was no movement at all and no flights so we had to quickly finish and accomplish the mission."

He said it was difficult leaving some South Africans behind because their temperatures were high and the authorities wouldn't allow them to leave.

Khumalo said arriving in Limpopo on Saturday, they got a warm welcome and love from people who waved placards in the streets as they landed. "That, to me, was when I got teary and I realised that we had our mission accomplished. This was one of South Africa's historic medical evacuations because not even with ebola did people have to be moved out of other countries."

Khumalo said at The Ranch Resort everyone is walking around with protective gear and masks.

"It's a very huge place and because of the masks I doubt some people will be able to recognise each other after the quarantine.

"We only meet at the dining area and we can also take walks to the golf course in the resort."