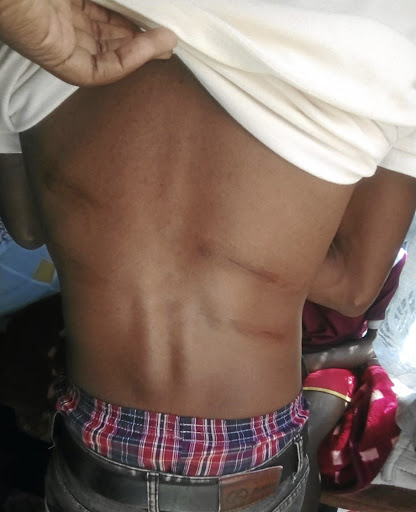 Lehlohonolo Mokopedi was assaulted together with his family during a violent eviction. /SUPPLIED

An 18-month-old baby was attacked together with her parents allegedly by their landlady and community members during an attempted eviction from a rented RDP house.

"I was attacked last Saturday by my landlord and a group of people she brought along to forcefully evict me from her RDP house. I was carrying my daughter who ended up being beaten with a pipe and wooden sticks that the group of people used to assault us."

The baby suffered bruises on her forehead.

A case of common assault was opened against the landlady and several community members.

Gauteng police spokesperson Cpt Mavela Masondo confirmed that they were investigating the matter.

Mokotedi said he and his wife had been renting the house since last year, however, in December the landlady sent a text notifying them of their eviction because she wanted to occupy the house.

"We then negotiated with her to give us more time to look for the new home, but she turned on us and told the community that we were trying to defraud her of the house," Mokotedi said.

He said after reaching an agreement with the landlady on the phone, he and his family were given enough time to look for another place, but then she changed her tune.

"She became unreasonable and started making early rent demands although she was based in Limpopo."

Mokotedi's wife Zanele said their troubles began when the woman asked her to lie to the housing department so that she could register for another RDP house in Limpopo.

"She asked me to tell the housing department that I was her daughter so she can get another house. When I didn't come on board, she began ill-treating us to the point where we got attacked."

Attempts to reach the landlady for comment were not successful yesterday.

The Correctional Supervision and Parole Board is yet to decide what to do about AbaThembu King Buyelekhaya Dalindyebo after his alleged assault on ...
News
2 years ago

The crimes committed by former crime intelligence boss Richard Mdluli and Mthembeni Mthunzi were so serious that the appropriate sentence should be a ...
News
2 years ago
Next Article