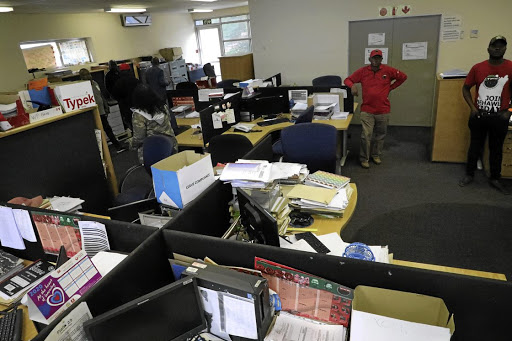 Gauteng department of education officials have staged a nine-day protest action against what they term an unsafe building in the middle of leafy Sandton, Johannesburg, endangering the lives of workers.
Image: ANTONIO MUCHAVE

A leaking roof, blocked toilets and an unbearable stench in the Gauteng education district offices has forced 200 workers to embark on a 12-day protest.

The Parkmore, Johannesburg, offices have been closed since March 3, affecting 139 public schools.

National Education, Health and Allied Workers' Union (Nehawu) acting branch chair Kgatishi Lamola said the building did not comply with occupational health and safety. "The department pays almost R2m a month to rent these offices. The contract lapsed last year in February and since then they are operating on a month-to-month basis. Who'll be responsible if something happens to us? We have been complaining about these conditions when we moved in here in 2009."

Sowetan found some of the toilets were blocked. Cupboards in the kitchen had no doors, a broken printer had turned into a home for rats. The fire extinguishers expired last November.

"When it rains, water comes through from the roof. This building can collapse at any moment," Lamola said.

He said they realised that there had been no service for schools for days but the safety of workers came first.

The Gauteng education district offices in Parkmore, Johannesburg, have been closed for the past nine days as workers are demanding better working ...
News
2 years ago

"This office is responsible for human resource-related matters. We also monitor municipal accounts, approve documents and have psychologists who are based here but now schools don't have access to them. There are about 50 schools that come here for admission on a daily basis but there is nothing we can do because the department has shown us the middle finger."

Gauteng education spokesperson Steve Mabona said it was aware of infrastructure challenges at the offices.

"We invited external stakeholders to assist and assess the building. Indeed we are on a month-to-month contract, however DID [department of infrastructure development] is assisting us to source an alternative space.

"We appeal with labour to work with us. Disrupting service delivery is not ideal and regrettable," Mabona said.

DA education spokesperson Khumo Ramulifho said it was not fair to subject employees to an unsafe environment.