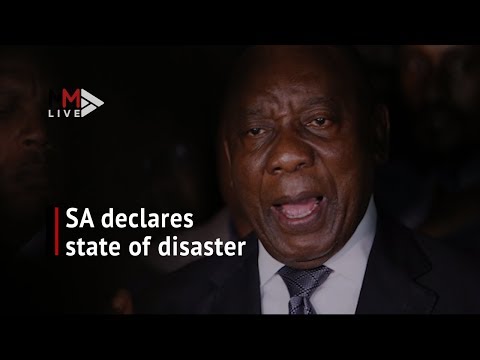 Schools will be closed and a travel ban will be in place from Wednesday as SA tries to curb the spread of the coronavirus.

On top of this, all gatherings of more than 100 people will be “prohibited”.

President Cyril Ramaphosa made these announcements as part of the country's fight against the spread of coronavirus, which has now infected at least 61 people.

He said that this number was “expected to rise in the coming days and weeks”.

“Initially it was people who have travelled outside of the country, especially Italy. It is concerning now that we are dealing with internal transmission of the virus,” he said, without providing further details.

Ramaphosa said that, despite the religious, social and economic implications of the decisions, they were necessary because of the severity of the virus and its rapid spread.

He said there was no time for “half-measures”.

Ramaphosa said that to enforce “social distancing”, gatherings of more than 100 people were prohibited, and that mass celebrations of national days (including Human Rights Day) and other government events were cancelled.

On top of this, schools would be closed from Wednesday, 18 March, and will remain closed “until after the Easter weekend”.

“We have cancelled visas ... and previously granted visas are revoked,” he said.

He also encouraged South Africans to refrain from travel to high risk counties, and said that non-essential domestic travel — particularly via plane, train and taxi — was discouraged.

1. A national state of disaster is declared in terms of the Disaster Management Act.

2. Travel ban on foreign nationals from high-risk countries such as Italy, Iran, South Korea, Spain, Germany, the United States, the United Kingdom and China as from 18 March 2020. Visa issuing to visitors from these countries is cancelled from today and previously granted visas are hereby revoked.

3. South African citizens are advised to refrain from all forms of travel to or through the European Union, United States, United Kingdom and other identified high-risk countries such as China, Iran and South Korea.

4. Gatherings of more than 100 people will be prohibited. Mass celebrations of upcoming national days such as Human Rights Day and other large government events will be cancelled.

5. Schools will be closed from Wednesday, 18 March, and will remain closed until after the Easter weekend. To compensate, the mid-year school holidays will be shortened by a week.

7. Working closely with unis, colleges etc to increase hygiene and put other appropriate responses in place.

7. Businesses are called upon to take measures to intensify hygiene control.

8. Surveillance and testing systems are being strengthened at hospitals.

9. Partnering with the private sector to develop a tracing, tracking and monitoring system for all those affected by coronavirus.

11. Package to be put together as a response to the economic impact of the disease.

12. Establishment of National Command Council chaired by President to meet 3 times a week to coordinate responses to pandemic.