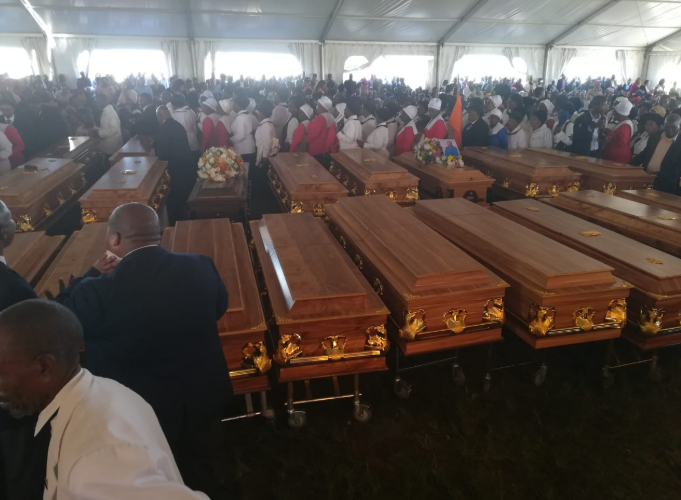 A mass funeral service is being held for 26 people who died in a bus crash in Centane in the Eastern Cape last week.
Image: Supplied / SAPS

A mass funeral has started for the victims of a bus crash in Centane in the Eastern Cape last week.

On Friday a massive marquee was erected at Cebe JSS for 26 of the people who died in the accident.

While Eastern Cape police said 26 people were being buried, the transport ministry last week placed the death toll at 29. It was unclear whether the other three had been given private burials.

On Friday, the coffins of the 26 were lined up in the centre of the marquee. Some coffins had wreaths and pictures of the deceased placed on top of them.

Last week, following the tragedy, some of the families called for government to assist with the burials of their loved ones, saying they could not afford to conduct the services themselves.

The bus plunged down a steep ravine last Monday morning. It was carrying mostly pensioners and pupils.

Transport minister Fikile Mbalula said it was believed the bus driver had lost control of the vehicle.

Bereaved families of the 26 Centane bus crash victims gathered at Nxaxho village to repatriate the spirits of their loved ones on Friday morning. pic.twitter.com/0LS0QSiRIx

Three people were killed and several others injured when a car rolled on the R408 near Dutywa in the Eastern Cape, police said on Sunday.
News
1 year ago

The Africa's Best (AB)  350 bus company has expressed their deepest condolences to the 25 families  that lost their loved ones and the 68 that were ...
News
1 year ago

'How many more must die on road', grieving families of Eastern Cape bus crash ask

The families of those killed in the Centane bus disaster in the Eastern Cape are struggling to accept that their loved ones are gone forever.
News
1 year ago
Next Article