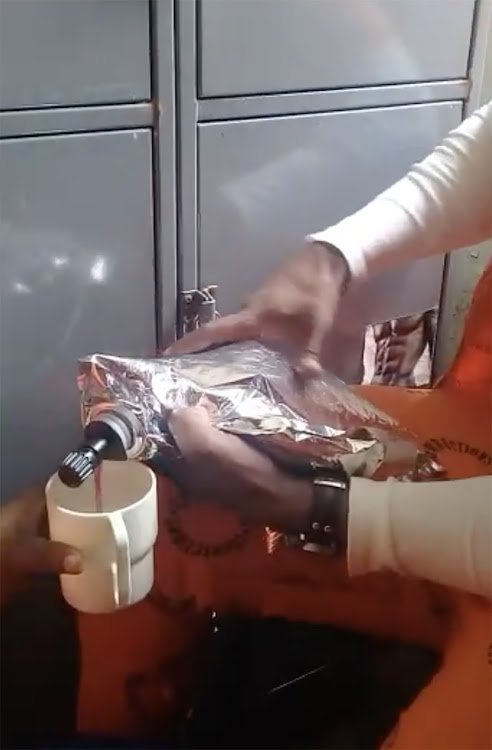 A video has emerged showing three prisoners drinking wine, playing music and browsing social media on their cellphones inside their Mdantsane prison cell.

The department of correctional services has launched an investigation into how the three smuggled the contraband into the cell.

DispatchLIVE has established that one of the prisoners in the video is Moses Xashimba — a senior East London magistrate’s court clerk who was sentenced to five years in prison for charging citizens thousands of rand for free documents, such as letters of executorship and letters of authority.

Xashimba, who worked at the deceased estate services point, was sent to prison by magistrate Twanett Olivier on November 29 last year after he pleaded guilty to fleecing each victim of between R5,000 and R14,000 for the free documents.

Another prisoner who attended the cell party is Justice Joseph, recently sentenced to six years in prison for card cloning.

Correctional services  spokesperson Singabakho Nxumalo said: “A full-scale investigation has been launched which will uncover more details on the circumstances under which the identified inmates managed to access mobile phones and private clothes.

“The department will leave no stone unturned on this matter as this is a serious breach of security. This type of behaviour displayed by inmates could never be accepted, so the department will take corrective measures against the implicated inmates.”

Nxumalo said the smartphones that were “brandished” by the inmates had been confiscated after a search exercise. He said the video was discovered on March 8 and a search was conducted on March 9.

“The perimeter fencing is a problem. People from outside can sneak in and drop contraband for prisoners.”

In 2018, former justice minister Michael Masutha said inadequate infrastructure and staff shortages, which had resulted in the escape of four dangerous criminals from the prison at the time, could not be fixed soon due to budget constraints.

Xashimba and his wife Khanyisa are due to appear in the East London magistrate’s court in connection with the assault of a minor.

DispatchLIVE understands that he was due to be paroled on the grounds of good behaviour.

Xashimba was arrested in 2018 alongside his co-accused, Manoko Lebotloane, and pleaded guilty on four counts of fraud after four people came forward saying they had taken thousands of rands from them in exchange for the documents.

Their guilty pleas were heard in the East London magistrate’s court on August 22. They were both granted R1,000 bail in October 2018.

In her plea statement, seen by DispatchLIVE, Lebotloane said she had committed the crime out of desperation.

Former Brazil and Barcelona player Ronaldinho Gaucho is adapting quickly to life in a Paraguayan jail, the head of the facility told Reuters on ...
Sport
1 year ago

Six inmates were killed in a prison riot in Italy and guards were taken hostage at another jail, as unrest spread in prisons across the country over ...
News
1 year ago
Next Article