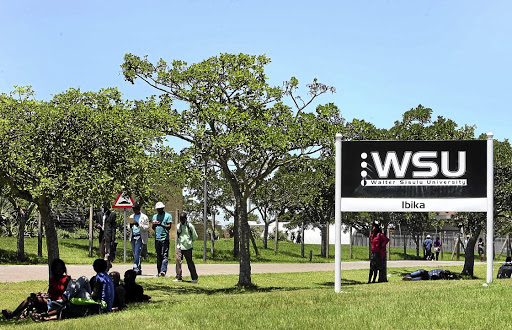 Some of the Walter Sisulu University graduates have not received their degree certificates due to outstanding tuition fees.
Image: YANDISA MONAKALI

Gugu Kwababa graduated in 2014 at the Walter Sisulu University (WSU) but was conferred with an empty envelope instead of a bachelor's degree certificate because of outstanding fees.

Six years later, Kwababa, 40, from Kokstad in KwaZulu-
Natal still does not have her crucial document.

"I graduated in office management and technology and I was a beneficiary of National Student Financial Aid Scheme (NSFAS) . I have been sent from pillar to post by both the institution and NSFAS. I don't know if I will ever get my certificate because I have been turned away by some companies as I could not produce my certificate," she said.

Kwababa is one of thousands of students who graduated at WSU but had their certificates withheld by the institution because of historical debts. "My mother passed away when I was young, and I was raised by my grandmother on her government grant.

"She could not afford to pay the debt, and I feel bad that at my age I still have to ask her to buy me pads and toiletries," she said.

Another student, Zanele Jinkithetho, 31, graduated in 2016 in Bachelor of education in arts and culture.

"I am that graduate who sits and basks in the sun because I don't have R11,900 to pay off my debt. I don't understand because I was a beneficiary of NSFAS. I went to a lot of job interviews, but the problem comes when I am supposed to submit my documents," she said.

When Ayanda Dlamini boarded a bus to travel 900km from Durban to Port Elizabeth, she was excited that she would begin her bachelor of education (BEd) ...
News
1 year ago

Nokuthula Rozani, 29, graduated in Bachelor of education in economics and management sciences in last year.

"Last year during my graduation, I was told I owed the institution R11,000, and this year it had gone up to R19,000. This is very stressful as there is nothing we can do without our certificates," she said.

Student representative council (SRC) deputy chairperson in Mthatha campus Sive Nqeketho said there were thousands of students who could not get their certificates even though they were registered with NSFAS.

"We went to the institution to ask what was happening, and were told our details were sent to NSFAS," he said.

Earlier in the year, higher education and training minister Blade Nzimande said they had with the Universities South Africa come to agreement that students, whether they owed or not, should be given their academic records.

Universities South Africa (Usaf) says student leaders have agreed to suspend protest action on most campuses around the country.
News
1 year ago
Next Article