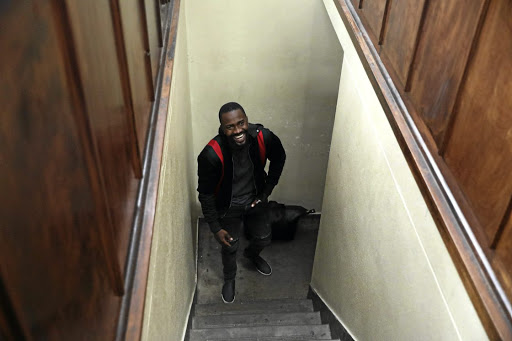 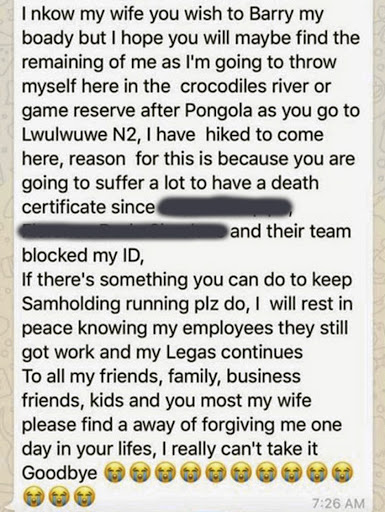 Multimillionaire trucker businessman Sam "Mshengu" Chabalala has gone missing and has sent his wife and some of his employees a "suicide note", claiming that his life was in danger.

Sources in the Hawks said the note, which he apparently sent to his wife on March 3, Chabalala said he never wronged anyone and does not know what he has done to "deserve this".

Chabalala is a wanted man after a warrant of arrest was issued for him on Friday when he failed to appear in the Witbank magistrate's court in connection with charges of corruption, illegal possession of a firearm and ammunition, illegal entry and remaining within the borders of SA, and providing false information to be granted entry into the country.

Chabalala is also out on R500,000 bail on a separate matter and faces charges of corruption and bribery after he allegedly attempted to bribe a senior police officer to return his vehicle and make his docket disappear in the initial case.

The matter was being heard in the Middelburg magistrate's court and was postponed to March 30.

Chabalala was last seen by his employees on March 3.

"I am not worried about the court cases but the incident that happened on Sunday its clear that this people are really mean to kill me [sic] ," Chabalala said.

"My worry is I never wrong anyone, or steal for anyone or this country, what really I have done to deserve this [sic]. Samholdings I started it from nothing with the help of no one, but now its clearly that my business and success is the source of all my current problems I'm facing [sic]."

In the note, Chabalala said he could not continue endangering the lives of those who are close to him and that he intends on saving his business.

"...They failed to keep me in jail now they come straight to kill me. The people I used to call my friends and I did help them are the ones destroying me right now."

In the note, Chabalala alleges that the Hawks have been paid to hound him.

Hawks spokesperson Brig Hangwani Mulaudzi refused to be drawn into the suicide note saga and said Chabalala failed to show up in court and there was a warrant of arrest that has been issued against his name.

"Investigations to track him are under way and we've called on the law-abiding citizens to contact their nearest police stations or Capt Dietlof Meyer on 071 481 2977. All information will be kept confidential," Mulaudzi said.

Sowetan contacted Hlau Maluleke, Chabalala's lawyer. and asked him about his client's whereabouts.

"I do not know where he is because I no longer represent him. I will try to get his wife to come back to you," Maluleke said.

An employee, who asked not to be named, said they were left shocked after hearing that Chabalala had gone missing.

"His wife held a meeting with us on Thursday [March 5] and said we should not come back to work until March 16. She said she had an SMS from Sam but did not get into detail about it. She said we must not worry but said she did not know where he was. We are worried because we might lose our jobs," the employee said.