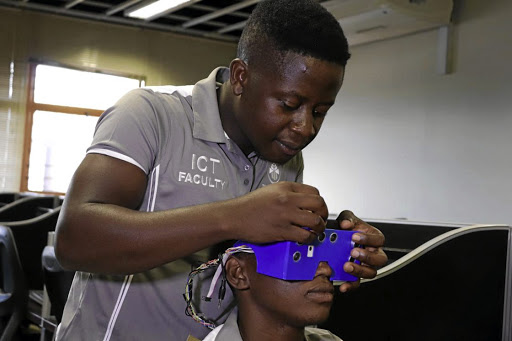 Clifford Chibi is one of the four Tshwane University of Technology students who invented the C4ME device to help visually impaired students navigate their way easier on campus.
Image: Supplied

After seeing blind students struggle with getting around campus on foot, four students designed a device to assist them to navigate better.

The inventors are studying for a qualification in industrial systems at the Tshwane University of Technology's Soshanguve south campus. They came up with a device named C4ME.

C4ME is a device that gets worn like sunglasses. It has sensors to detect obstacles, and through voice prompts, advises the user on how to overcome the obstacles ahead.

It also has the ability to calculate money, both the SA coins and notes, when they are placed right in front of it.

Emmanuel Mahlangu, 20, one of the four inventors, said: "One day we were walking and talking at school, and a random student just bumped into us, and when we checked, we realised the student was visually impaired."

Mahlangu said the incident sparked an idea almost immediately. It was himself, other fellow students Philanjalo Ndlovu, 26, Siphamandla Mqcina, 21, and Clifford Chibi, 23, who undertook the project.

"The four of us sat down and discussed how we were going to help him through our skills, knowledge and technology, and that is how C4ME came about," said Mahlangu.

Mahlangu said their invention was already recognised by an international competition that was sponsored by Redbull, which takes a keen interest in "incredible inventions".

The students were up against 20 other countries, and secured top 10 spot in Toronto, Canada.

His passion to be part of the solution to the many problems ailing SA's healthcare system was what attracted Mzwakhe Moqhaisa to the Free State ...
Business
1 year ago

Mahlangu told Sowetan they only have two working prototypes, and the visually impaired have not yet started using them because they are not fully developed yet. However, tests which have been conducted were successful.

Patrick Motshwene, the academic technician at the faculty of information communications technology, who oversees students' projects, said he believes that the device will help boost blind students' self-esteem.

"Their sense of pride will be uplifted. Students normally use sticks to detect obstacles, and with the device the sensor is more effective because it automatically detects in their behalf, which will make life more easier for the blind," Motshwene said.

Motshwene said since the device was now the students' property, the institution is speeding up the process to patent the device so that blind students can use it.

"We are still on the development stage, but once we get sponsors, we will improve the device until it reaches the people in need," said Mahlangu.

They were even forced to sacrifice funds from their own bursaries to build the device "Right now we need money, we need funds, we need people with experience, we need people who can help us so that we can make C4ME help others who cannot see," he said.