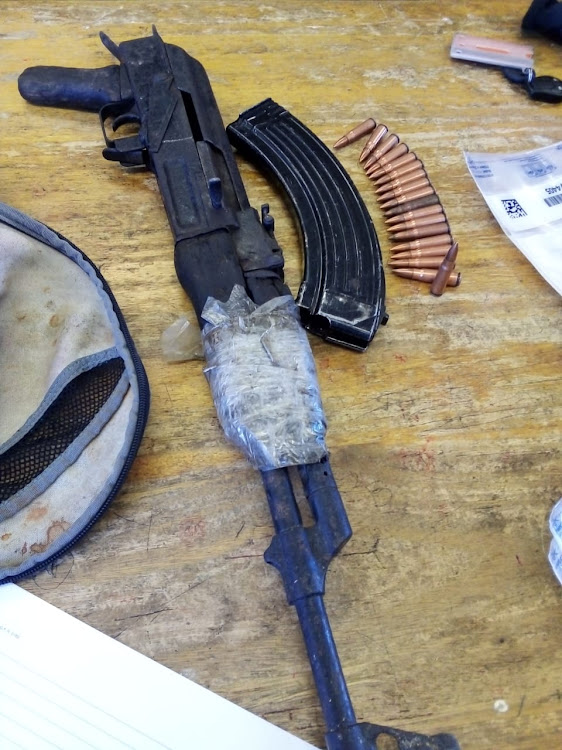 Two KZN men were arrested for stealing an AK47 rifle after witnessing a shooting in KwaMashu.
Image: Supplied.

Two KwaZulu-Natal men have been arrested for stealing an Ak47 assault rifle after witnessing a shooting in KwaMashu, north of Durban, on Friday evening.

The men stole the gun after unknown assailants shot at a car travelling on Nyala road, causing both vehicles to crash into a residential wall and leaving the driver wounded. The shooters abandoned their vehicle and hijacked another in the area.

Police arrived on the scene of the incident and investigations led to the arrest of the two men, both aged 29, who were found in possession of the AK47 rifle and ammunition.

Gwala said they are due to appear in the Ntuzuma magistrate's court on Monday on charges of illegal possession of a firearm and ammunition.

The suspects in the shooting are still at large and Ntuzuma police are investigating charges of attempted murder, carjacking, possession of an unlicensed firearm and ammunition.

“I am confident that the suspects involved in the shooting will be arrested soon,” said KwaZulu-Natal provincial police commissioner Lt-Gen Khombinkosi Jula.

KZN woman's cousin, neighbour held after her rape and strangulation

A 20-year-old KwaZulu-Natal woman was brutally murdered after being repeatedly raped, allegedly by her cousin and a neighbour.
News
1 year ago