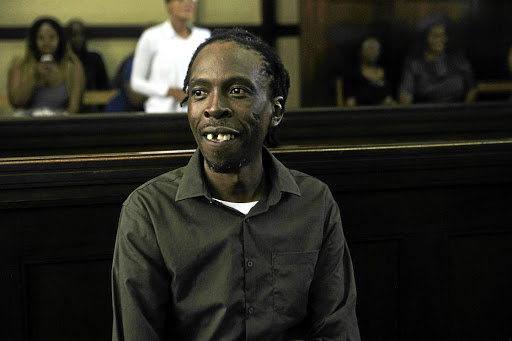 Pitch Black Afro during a court appearance in court for the murder of his wife in December 2018. He denies meeting Sgt Lufhuno Sono before his arrest. /Veli Nhlapo

A high profile police officer who is known for solving gruesome murder cases has denied assaulting and forcing rapper Pitch Black Afro into confessing to the murder of his wife Catherine Modisane.

Modisane was allegedly killed by Pitch Black Afro, real name Thulani Ngcobo, on New Year's Eve in 2018 at a bed-and-breakfast in Bellevue, Johannesburg.

Sgt Lufhuno Sono, who successfully investigated the Rhodes Park murders, took the stand in the South Gauteng High Court in Johannesburg yesterday after allegations were made against him and his colleague Capt Mbhazima Pila by the rapper.

Ngcobo alleged that Sono and Pila had assaulted him into confessing to the killing of his wife with a promise to get him a lenient sentence.

The court has entered into "a trial within a trial" to establish whether Ngcobo's earlier confession is admissible.

Pila who took the stand earlier this week has also denied the allegations.

Sono, led by prosecutor Matshiliso Moleko, told the court he knew Ngcobo before his arrest.

The magistrate presiding over the bail hearing of rapper Thulani Ngcobo has threatened to strike the matter off the roll.
News
3 years ago

"I knew him in Yeoville as a musician. I have once spoken to him before," he said.

"I gave him a lift when he was with his wife; I was actually coming from court. We were discussing Rhodes Park because he knew me from the case. He asked me how the case was going on."

Sono told the court that his name was all over the news which made him famous in Yeoville and the surrounding areas that the rapper frequented.

The rapper was in good spirits while reading a copy of Sowetan before the proceedings but became annoyed when Sono mentioned that they had met before. He denied meeting Sono before his arrest.

Moleko asked Sono about the proceedings of January 10 2019 when Ngcobo made his first appearance at the Johannesburg magistrate's court after being charged with premeditated murder, and defeating the ends of justice.

"It was my first day back from an injury, due to that I was no longer investigating so I was put in [charge of] the cells," he said. Sono said his duties that morning included checking on prisoners and making sure they were captured on the system.

He denied that he was involved in Ngcobo making his statement or confession. He said he and a colleague took the rapper to court and left him in the cells.

Ngcobo's lawyer Rian Greyling said according to Ngcobo not only did Sono assault the rapper but he also apparently promised to get him leniency if he confessed to the crime.

"You told him he is guilty. you told him that he is a murderer," said Greyling.

Greyling said after Ngcobo refused to sign the prepared statement at the police station another police officer suggested he confess in front of a magistrate.

"You also told the accused he can't bury someone that he murdered," said Greyling.