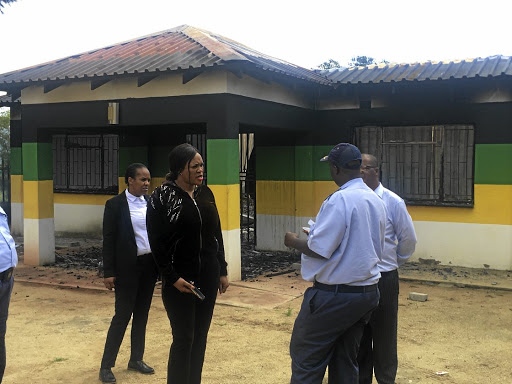 Community safety MEC Gabi Shabalala inspecting the damage at the ANC constituency office that was burnt down by the protesters in Barbeton. / MANDLA KHOZA

More than 14,000 pupils have missed classes for nearly a month due to ongoing protests in Barberton, Mpumalanga, over the area's incorporation into Mbombela from Umjindi municipality.

Fourteen primary schools and five secondary schools in the area have been closed for more than four weeks.

In a bid to boost Mbombela local municipality's status to become a metro, the Umjindi local municipality was disestablished and the areas under it moved under the City of Mbombela. But the community claims the move has impacted them negatively as service delivery has deteriorated.

Yesterday, the protesting community went on the rampage torching a community hall and several vehicles.

The department of education in Mpumalanga said it was concerned about the 14,535 pupils from Umjindi circuit that have been affected by the protest.

"The Mpumalanga department of education is concerned that about 14,535 learners have since been deprived of their right to education due to the protracted community protest in the area," said spokesperson Jasper Zwane.

"Out of these affected learners, about 524 are in Grade 12 and their prospects of making the grade is becoming bleak by the day as they are prevented from attending classes. As from today [Wednesday] there are only 17 school days left before schools close for the Easter holidays and if the situation continues unabated, learners at this circuit would regrettably have had no sufficient school work for the first term."

The department appealed to parents and the community at large to work together in normalising teaching and learning by allowing pupils to go back to class.

Some parents told Sowetan that they were worried about the future of their children.

"My son is doing Grade 11. He has not been to school for a month now. I'm scared that he might fail at the end of the year. I don't know where they are going to get time to study because the year is ending very soon," said parent Thoko Shongwe.

The community of Barberton in Mpumalanga on Monday set alight the constituency offices and the municipality building during a long-running protest ...
News
2 years ago

Mpumalanga police have arrested a suspect in connection with the killing of a Barberton youth, amid ongoing community protests in the town
News
2 years ago

"We started this protest peacefully. All we wanted was water, better roads and the reversal of the amalgamation of our Umjindi municipality with the City of Mbombela, but instead of being attended to by either ministers responsible for such issues, we got police and rubber bullets as a response," said one protester.

"Our politicians don't want to talk to us; they send police to harass and arrest leaders of the protest. That is why we will not stop or hear anyone."

"The issue of the people saying they don't get addressed by the political leadership is not true because we were here last week with the MEC for co-
operative governance and traditional affairs [Mandla Msibi], but instead they went on a rampage and hindered other citizens' rights. And as the police we are here to make sure that the rights of others are not hindered," said Zuma.

"This started as a protest for services ... but now it's no longer that because these people are burning infrastructure and they do that at night," Shabalala said.

"Why don't they protest during the day and voice their concerns? We know there are community members who are law-abiding. We are asking them to please help stop this for the future of our children who have not been attending school all this time."