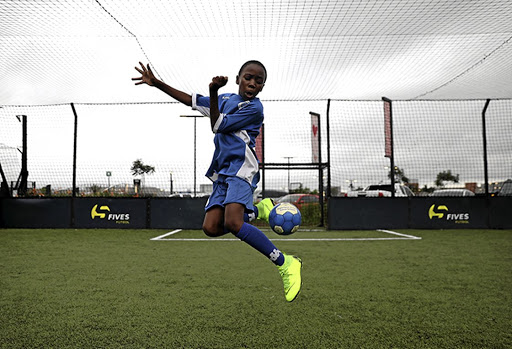 Safa says it will implement a new rule that comes from Scottish, Irish and English football chiefs that U12 kids should not head the ball at training. Mnotho Nhassengo, above, of Durban uses his legs at training instead. / Sandile Ndlovu

Children under the age of 12 are banned from heading soccer balls in training to protect them against brain damage.

While the SA Football Association has not formally announced the ban, the soccer authority said it would have to implement the new rule that came from Scottish, Irish and English football chiefs.

On Monday, football associations in England, Scotland and Ireland announced the rule would come into immediate effect following a "landmark field study".

Drawn up in conjunction with the Union of European Football Associations' (Uefa) medical committee, the new guideline states that children between the ages of six and 11 should no longer head the ball during training sessions. However, the ban does not apply to games.

Durban mother Luyanda Nhassengo is not concerned about her 11-year-old son heading the ball during the game. Her main concern since Mnotho started playing five years ago has been the ball hitting him.

Soccer fans around the country are still stunned after an unidentified man drove his car onto the pitch and allegedly tried to run over the referees ...
Sport
1 year ago

"The concern I've had was the ball hitting him as I've seen the painful reaction the young boys have when this happens," she said.

SuperSport United Soccer Schools head Nick Aresi said: "Our coaching programme originated in the United Kingdom, and this debate has been going on for a very long time in England, and they have done a lot of research and studies.

"It's pretty obvious that all children need to be protected in sport. When they ride a bicycle they wear a helmet, when they wrestle or rock-climb, they wear headgear.

"The problem is that we look at kids as adults, and we watch the game on television and we want the kids to play an adult game.

"We use smaller and heavier balls. Our balls don't really bounce. They die on the second bounce and the reason for that is to keep the ball on the floor."

"Their protection mechanism says don't head. They are fearful of doing it," he said.

Jared Carlson of Euro Soccer Schools, which also trains children across the country, agreed that children were scared to head a ball.

"The problem with some coaches these days is that they are old-school, so they throw the ball as high as possible in the air and tell the kids not to be scared.

Liverpool manager Juergen Klopp is looking for his defence to regain top form after a third loss in four games across all competitions but Saturday’s ...
Sport
1 year ago

"That's not proactive training. We do not promote heading. Any kid that is under 12 years will be heading in the match, but we don't train heading," said Carlson.

He said there was no need for young children to train to head a ball when they were most likely not going to use heading in a game.

"A person may head a ball once or twice in a match, but for a person to now go and train religiously every week, that is definitely going to cause damage. So, why train heading if only one or two players are going to head it once or twice?" he asked.

However, Bafana Bafana technical director Neil Tovey believes children should be taught how to correctly head a ball.

"It all boils down to the correct technique. Yes, you are going to get hit in the head at times, but that is part of the game, so generally it comes down to teaching them how to do it correctly," he said.

The former Bafana captain said coaches should use a soft plastic ball to show children how to head it. He questioned if the research behind the ban was conclusive.

"They have done their research, but I believe you train how you play and you play how you train.

"I know these players are youngsters, so their bodies may have not developed, especially their heads, but there are not many times they head in games. Did the research look at whether the affected players may have had a clash of heads in the game later on? What else did they look at?"

Kaizer Chiefs have suffered a massive blow after it emerged on Wednesday that injury could rule Willard Katsande out for the remainder of the season.
Sport
1 year ago

Keagan Dolly is back in training at French Ligue 1 side Montpellier and is just a few weeks away from being ready for first team action.
Sport
1 year ago

Two victories in a row have seen Polokwane City move themselves off the bottom of the premiership standings and now out of the relegation zone‚ but ...
Sport
1 year ago
Next Article