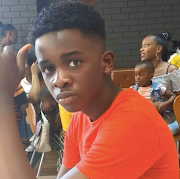 Image: @CuedaBeat_bhr via Twitter The media has been barred from a parents' meeting at which a report into Enock Mpianzi's death is being released.

Some parents of Parktown Boys' High School pupils on Wednesday said they were against the media being permitted into a parents' meeting at which the forensic report into the death of grade 8 learner Enock Mpianzi is to be released.

The media had been invited by the Gauteng department of education, but ahead of the meeting MEC Panyaza Lesufi opened the floor to hear the views of the parents on whether they wanted the media present.

The views of seven parents were heard. The majority of them said they were not keen to have journalists at the briefing.

One said they were concerned about their identities being revealed. Another said they simply did not want the media there, arguing that they had reported inaccurately on the incident.

Only one of the seven parents was in favour of having the media present, arguing that other parents who were not present at the meeting were relying on the media to follow the proceedings.

Lesufi agreed to exclude the media from the meeting, which was held at the school premises. “But we need to apologise to members of the media, because they were invited here,” he added.

When some parents questioned who had invited the media, Lesufi defended his department for extending the invitation, saying his department was a transparent public institution.

When the decision was announced to excluded the media from the meeting, the parents applauded while proceedings were paused briefly to allow journalists to leave the room.

Lesufi will brief the media later on the contents of the report, which is expected to shed light on whether there was any negligence and if anyone is to blame for Mpianzi's death.

The 13-year-old boy drowned at a grade 8 orientation camp on the first day of school in January. He was only reported missing a day later, however. His lifeless body was found another day later, washed down the Crocodile River.