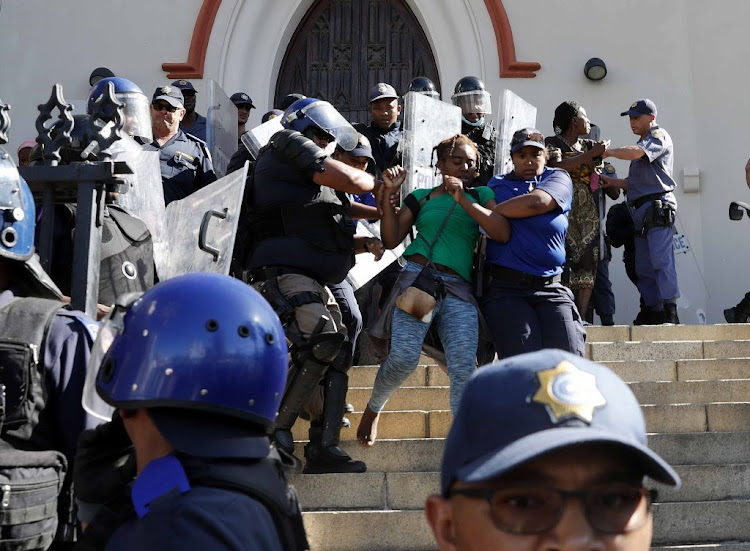 Clashes broke out between law enforcement officials and refugees on March 2 2020 when the refugees refused to move out of the park in Cape Town's CBD.
Image: ESA ALEXANDER/TIMESLIVE

Parliament has called for the immediate resolution of the dispute between the City of Cape Town and refugees who were located outside the Central Methodist Mission on Greenmarket Square.

Over the weekend, hundreds of law enforcement officers enforced a court order allowing the city to remove refugees who were illegally camping outside the church.

“It is untenable that the situation continues to persist, despite numerous attempted interventions that have not yielded desirable results. We would like to urge refugees to comply with the laws of the country and with the bylaws of the City of Cape Town,” said Bongani Bongo, chairperson of the portfolio committee on home affairs.

Bongo called for the full implementation of bylaws and the recently attained court order to ensure that the matter was brought to an end.

He said it was unfortunate that the refugees had continued to “undermine” the laws of the country to attempt to force the United Nations High Commissioner for Refugees (UNHCR) to act in a way that is only favourable to them, despite being told that the organisation is unable to assist.

Law enforcement clashed with refugees on the outskirts of Cape Town's CBD on Monday March 2 2020 in an attempt to move them outside the city. Approximately 200 refugees had earlier spent the night in a park on the outskirts of the CBD after being removed from Greenmarket Square by law enforcement on Sunday. A court order granted to the city states that the removed refugees may not relocate anywhere in the CBD.

“Furthermore, the minister of home affairs informed the committee that he had held numerous interactions with the countries the refugees say they are willing to relocate to, but that these countries are unwilling to assist.

“The actions of the refugees are even more concerning considering that the xenophobia they refer to is not a factor in Cape Town. South Africa welcomes refugees and asylum seekers, especially in the context of our history, but the precondition of any country accepting refugees is that the laws of the receiving country will be respected at all times.”

The committee said it hopes that a reasonable resolution to the standoff can be found, especially for the women and children caught up in it.

“The committee calls on the refugees to consider reintegrating into the communities they came from before the start of the protest, to enable children to go back to school. Furthermore, each individual must apply through the UNHCR process for further assistance.”

It also called on all levels of government to work together with the UNHCR and the refugees to find amicable solutions to the challenges the refugees face.

Hundreds of law enforcement officers, some wearing masks over their mouths, arrived in Greenmarket Square in Cape Town on March 1 2020 to enforce the ...
News
2 years ago

Law enforcement officers lined up again on Monday morning to enforce the court order granted to the city to prevent the group from relocating ...
News
2 years ago

The City of Cape Town said on Tuesday that it was continuing its operation to enforce the court order.

“Overnight, a group of the refugees settled on open land in the vicinity of the Cape Peninsula University of Technology (CPUT). The city’s enforcement agencies have since started an operation to move them from this piece of land,” said city spokesperson Luthando Tyhalibongo.

Tyhalibongo said three men, aged 17, 38 and 41, had been arrested since the start of the operation at the weekend — for assaulting a police officer, contravening the court order and resisting arrest.

“This is an extremely volatile situation, which the city is trying to manage as best as possible. We appeal to everyone concerned to please allow our staff to execute their duties, in line with the court order,” he added.

The Congress of the People (COPE) meanwhile called on the government to establish camps so that the refugees can be regulated and looked after by the UN and the department of social development in a “humane and conducive” environment.

“The inability of government to control influx into the country has already created huge problems with our health facilities and education system,” said the party.

“COPE wants to send out a very strong message to all so-called refugees that there is law and order in this country, and it is expected from them to also respect these laws, like all other South Africans.”