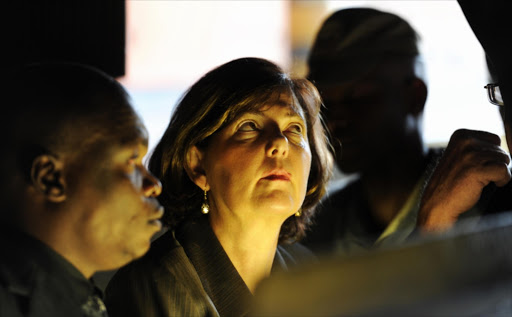 Creecy absorbed a barrage of complaints from a feisty crowd that crammed into the Alphen Centre in Constantia. But she bounced back with an impressive townhall-style speech that promised prompt action to address several shortcomings such as security, maintenance and public access.

She also announced the reintroduction of a regular public forum for residents to air their grievances.

Creecy initially scribbled notes and listened intently as stakeholders listed a wide range of concerns, from exorbitant permit fees – including a R100 surcharge on joggers – to security jitters.

Anwar Adams, who suffered a serious skull injury in a violent attack on the mountain two years ago, drew a large cheer when he questioned the efficacy of current security measures.

“I see more rangers in this room than I’ve ever seen at one time on Table Mountain,” he said.

“People are being kind here today - maybe because they are afraid they are going to be attacked,” he added, in reference to the recent attack on SA cyclist Nic Dlamini in which his arm was broken by a SANParks ranger

There was also sharp criticism of Table Mountain National Park’s budget priorities, with many user groups complaining that, despite paying significant user fees, the park was not even doing basic maintenance of amenities like trails or site maintenance.

Allyn McPherson's life was defined over 47 years by the presence of her husband Ian.
News
2 years ago

Creecy also fielded questions from residents of disadvantaged communities such as Hangberg and Masiphumelele.

“Honestly, minister, especially kids coming from the townships, we don’t enjoy that specific privilege of going hiking or mountain-biking because ... we are hungry,” said one resident from Hout Bay. “We need employment; we are not stressing about whether we can go for a hike.”

Another speaker pointed out that most stakeholders seemed primarily interested in how they could benefit from the park, rather than protecting the mountain’s unique biodiversity.

“Table Mountain is part of a world heritage site, its biodiversity one of the most important in the world - and yet we are all talking about what we can get out of it," said the speaker.

Creecy insisted she would ensure that all concerns were taken seriously. “You pay me to do my job - that's why I’m here,” she said.

Allyn McPherson's life was defined over 47 years by the presence of her husband Ian.
News
2 years ago
Next Article