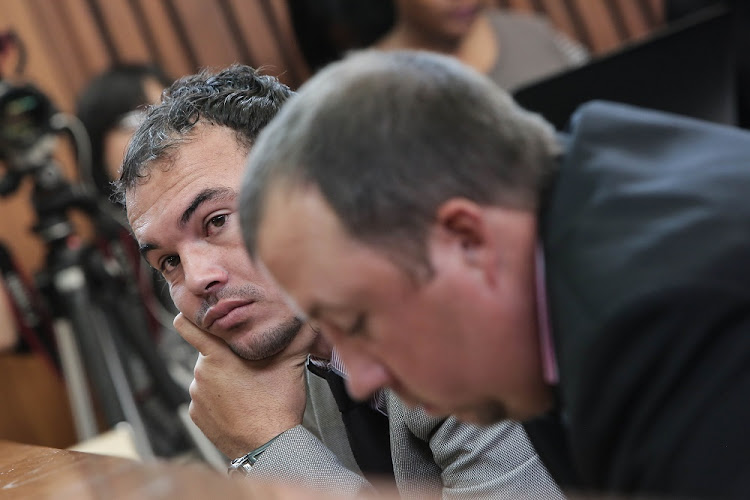 Theo Jackson and Willem Oosthuizen, who forced a man into a coffin and threatened him with death, have been granted parole.
Image: Alaister Russell/The Times

“It is shocking and there is nothing I can do. I am heartbroken and no longer interested in those guys.”

These were the words of Victor Mlotshwa after Willem Oosthuizen and Theo Jackson were released on parole.

In 2016 the two farm workers forced Mlotshwa into a coffin and threatened to kill him.

The high court in Middelburg had in 2017 sentenced Oosthuizen and Jackson to 16 and 11 years behind bars, respectively, but the Supreme Court of Appeal overturned the attempted murder convictions in December last year. The two spent two years and a few months behind bars for assault with the intent to grievous bodily harm before being released.

“Having served the minimum required time and fully completed the necessary rehabilitation programmes, the Correctional Supervision and Parole Board resolved to place them on parole.

“They now remain under community corrections and will be monitored as per their parole conditions until the expiry date of the sentence,” he said.

Their release on parole did not sit well with Mlotshwa.

“I did not even know they were released. I went through a lot. A lot has happened and I just gave up on everything. Just last year their sentences were reduced and now they are out of prison. I really don’t know what to say.

“We are still grieving from everything, and a few years down the line the guys are out of prison.

“My mother hasn’t been the same ever since the case and has been in and out of hospital. We are slowly recovering and gaining momentum.”

The Middelburg man who was forced into a coffin and threatened with death by two farmworkers who alleged he had been stealing copper cables on ...
News
2 years ago

The man who was forced into a coffin said he was shocked to hear that his attackers had been granted leave to appeal their sentence.
News
4 years ago
Next Article