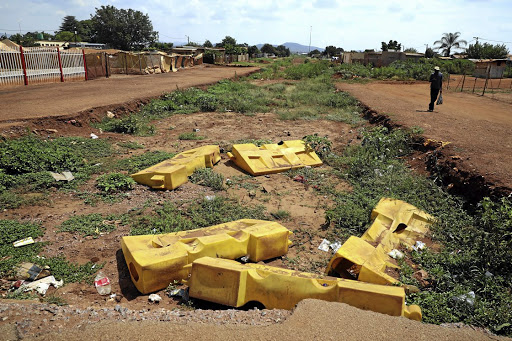 Streets in a Soshanguve section, north of Pretoria, have been left dug up by a contractor, leading to motorists struggling to access their homes.
Image: ANTONIO MUCHAVE/SOWETAN

Hundreds of residents of Soshanguve, north of Pretoria, have expressed relief that an abandoned road construction that left them unable to access their homes for over four months has resumed, thanks to the intervention of Gauteng MEC for public transport and roads infrastructure Jacob Mamabolo.

Mamabolo conducted a site inspection of the abandoned road construction project in the City of Tshwane on Friday.

His visit followed Sowetan's article last week about the plight of the affected residents.

Commuters are also forced to walk long distances for public transport due to dug-up streets after a contractor abandoned the site due to an alleged payment dispute with the Tshwane municipality.

Mamabolo said the project will resume today after talks with the contractor and the City of Tshwane on Friday.

After the community alleged that there was an issue of nonpayment by the city, investigations revealed that the contractor had cash-flow problems that caused a delay in the project.

Hundreds of Soshanguve residents, north of Pretoria, have been unable to access their homes due to dug-up streets.
News
1 year ago

"Secondary was an issue of some community members demanding high percentages in local sub-contraction for local job employment but after the meeting the contractor has assured us they have resolved their internal problems and will commence the project on Monday," Mamabolo said.

"I was more concerned about the alleged nonpayment from the city to the contractor but it was revealed that the City of Tshwane had made payments on time."

The MEC also said the contractor had also agreed to make an alternative route for commuters and motorists to be able to access their homes.

"It will take about three months for the gravel and rocks to be cleared but the road construction project will still take about a year and a couple of months to complete the whole project."

Resident Johannes Mutheiwana said the resumption of the project has come as a great relief for residents of Extensions 5 and 13, where over 10 streets were dug up to be developed into tar roads.

"We are very happy that at least our misery will soon be over. We could not drive into our homes, cars had to be parked far and our neighbours using taxis had to walk far to get their transport," said Mutheiwana.

Elizabeth Sejake, another resident, said the abandoned project was a nightmare but expressed happiness that the project will resume.