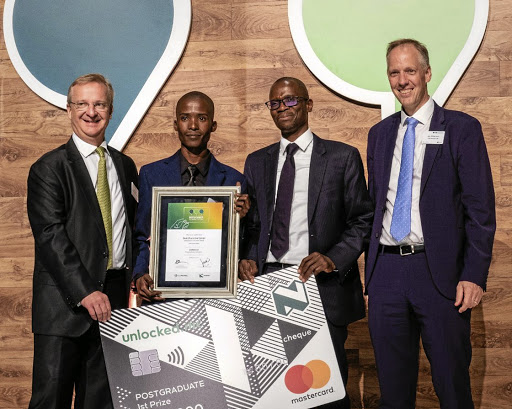 Bekithemba Qeqe and Matifadza Bingudza were announced the biggest winners in the prestigious Budget Speech competition at a gala dinner held in Cape Town last week.

The two scooped the top honours in the Nedbank and Old Mutual Budget Speech competition designed to motivate and incentivise SA's most talented students in economics and finance to contribute to national debates on crucial issues. Their essays impressed some of the best thinkers in the country.

Qeqe, 26, from the University of Fort Hare in Alice, Eastern Cape, claimed the first prize of R150,000 in the post-graduate category, while Bingudza walked away with R60,000 in the undergraduate category. Postgraduate students had to write an essay, and the topic was: President [Cyril] Ramaphosa has announced a number of initiatives to stimulate economic growth - i.e the $100bn investment target, the jobs summit and the stimulus package. What do you think will be the likely outcome in terms of the stated aims of lifting growth and creating more jobs?

Qeqe argued, among others, that the country cannot achieve its developmental goals if those responsible for corruption, mismanagement of funds and abuse of power continue to go unpunished.

A group of 20 students have been given an opportunity to find practical and workable solutions to some of the country’s key social and economic ...
News
1 year ago

"It took me a month to write this essay... I was happy to be announced as a top 20 finalist. I truly did not expect to win. I entered the competition because I like testing my knowledge about the current affairs of the country," he said.

The essay topic for under-graduates was to make a case for and against investing in South Africa.

Bingudza wrote investment decisions, particularly in emerging markets such as that SA should be based on a holistic understanding of the factors within an economy that have the potential to affect investment returns.