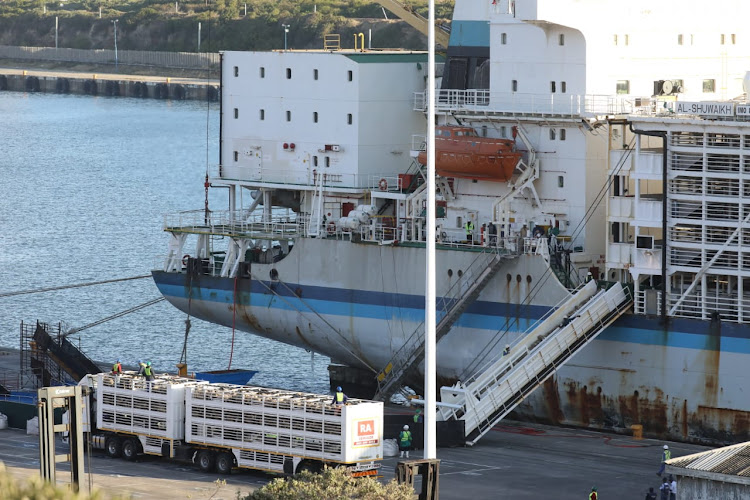 Al Shuwaikh crew loading 60,000 sheep in October 2019. Advocate Gerrie Nel, appearing for the NSPCA, asked for a postponement of the matter on Friday as the wrong papers had been filed with the court and 14 respondents. The magistrate refused and ordered the NSPCA to pay costs.
Image: Alan Eason

The National Council of SPCA’s high court bid to ban exports of live animals by ship failed in the high court in Makhanda on Friday.

After a full morning of four senior counsel slugging it out in court, high court judge Thami Beshe unceremoniously struck the matter from the roll and ordered the NSPCA to pay the costs of the application.

Advocate Gerrie Nel, appearing for the NSPCA, came to court to ask for a postponement, submitting that they had accidentally filed the wrong court papers with the court. It had also served the wrong papers on 14 respondents in the matter, including four government departments.

He brought an application to be allowed to amend the papers and postpone the matter.

Agri Eastern Cape has hit out at AfriForum for coming out “guns blazing” to help the National Council of SPCAs seek an interdict to halt the export ...
News
2 years ago

Advocate Nick Mullins SC for the department of agriculture and other government departments, advocate Johan De Waal SC for Al Mawashi and advocate Izak Smuts for the Page Farming Trust all urged Beshe to strike the matter from the roll or dismiss the application in its entirety.

Beshe struck the matter from the roll and ordered the NSPCA to pay the costs of the application. She said she would provide reasons in due course.

Outside the court emerging farmers demonstrated with placards accusing the NSPCA and AfriForum — who had joined forces with the NSPCA in its application — of being “anti-black” and of destroying jobs in farming with their bid to ban live animal exports by sea.

The NSPCA’s CEO Marcelle Meredith told DispatchLIVE the organisation would comment in due course. She would only say that the NSPCA would continue to fight on behalf of all animals.