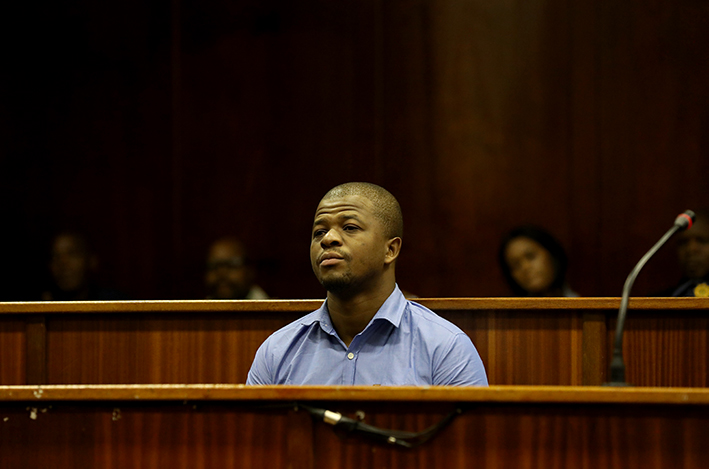 Thembinkosi Ngcobo, a former SANDF rifleman, was sentenced to life imprisonment after he went on a rampage in January 2017, shooting and killing his girlfriend's sister.
Image: Sandile Ndlovu

Durban high court judge Shyam Gyanda lambasted former SA National Defence Force soldier Thembinkosi Ngcobo for his disregard for women as he sentenced him to life imprisonment for the murder of his girlfriend's sister.

In 2017, Ngcobo drove from Upington in the Northern Cape, where he was stationed, to Inanda, with the intention of killing his then-girlfriend Nontokozo Mbambo and himself after suspecting she was cheating on him.

After failing to find Mbambo at her home, he opened fire killing one of her sisters and wounding another.

“It became apparent during the trial that his motivation was his arrogance and his belief that he had the right to treat his girlfriend in any way because she was his girlfriend and he could do whatever he wanted to her,” said Gyanda.

“It is clear from the evidence that what appears is a person who as a man feels like he can treat his girlfriend however he feels. In a country where we have been having many campaigns against gender-based violence you just hear someone saying your girlfriend is cheating and you don’t even enquire with her,” he said.

The state, in the murder trial of a former SANDF soldier, says it is being held to ransom after sentencing was again postponed due to the accused's ...
News
2 years ago

In mitigation Ngcobo’s lawyer, Mhlonipheni Sibiya, argued that Ngcobo, who was 24 at the time, was driven by his reckless youthfulness and emotional state at the time of the offence.

“It has been held before court that the accused at the time had suspected his girlfriend of being unfaithful. This affected his mental state,” said Sibiya.

However, Gyanda questioned what Mbambo’s sister had to do with Ngcobo’s relationship woes and suspicions.

Testifying during aggravation of sentence, a soft-spoken Mbambo said: “I am really not OK, it's been difficult.”

She said she went into hiding as she was afraid that she would be killed. State advocate Krishen Shah, probed this statement further and it emerged that her mother and sister were killed in a subsequent attack by unknown people.

She didn't want to comment to SowetanLIVE's sister publication TimesLIVE after the sentencing.

The driver of an SANDF tank narrowly avoided what could have been a disaster when he crashed into a barrier fence during a demonstration on Monday.
News
2 years ago
Next Article