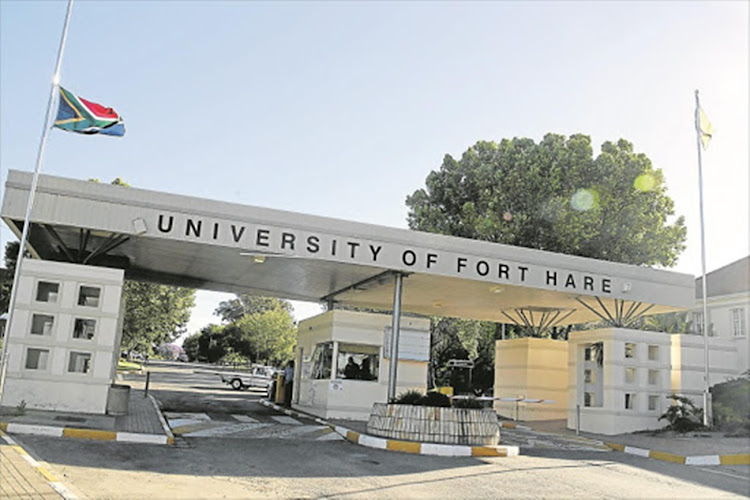 One third-year student, who asked to remain anonymous, told DispatchLIVE they were protesting against the exclusion of 3,000 students over unpaid registration fees at both the Alice and East London campuses.

“The SRC has failed us because not one of them is here,” said the protester.

One balaclava-clad student shouted “manyoronyoro ndini” [traitors] at police after they dispersed a group of students.

Students at the Alice campus have been staging demonstrations all week.

Eleven protesters on the campus were arrested by police on Wednesday afternoon on charges of pelting motorists and police with stones, as well as damaging property.

The arrests came “after several attempts were made by the police to advise students to refrain from resorting to violent means to pursue their grievances,” said the police's Brig T Kinana in a statement. “Instead, the angry protesters advanced towards the security at the gate in defiance of the order that they remain inside the campus.”

A 30-year-old man who was stabbed to death in Alice in the early hours of Saturday was identified as a University of Fort Hare student.
News
1 year ago

The previous day, he said, a truck carrying foodstuffs was looted during the protest, tyres and other rubble were burnt on the road and a state vehicle was damaged.

University management said in a statement it was forced to suspend academic activity and release staff at its Alice campus on Tuesday “due to violent student protests which included chasing staff out of their offices, thus leading to a complete disruption of campus operations.”

At the heart of the protest is a “register one, register all” demand by students.

Some students, however, have been financially excluded from the university because of historical debt and do not meet the criteria of the national department of higher education, the institution said.

“Management has continuously engaged with such students and a number of concessions in this regard have been made.”

A 22-year-old University of Fort Hare male student has been arrested in connection with the murder of 20-year-old Unisa student, Mbasa Hlalukana
News
1 year ago

As a result of the violent protests, the university said it had invoked an existing court interdict which prevents students from disrupting campus operations.

“Management would like to urge students to desist from instigating acts of violence and ill-discipline in order for the academic programme to resume. All possible avenues are being explored to assist financially excluded students. However, the university is not in a position to concede to the demand of ‘register one, register all’ as that would bring the university to its knees.”

Meanwhile, Fort Hare university said the veracity of an allegation that a student had been assaulted by police, as shared on social media, could not be confirmed, despite thorough checks.

“The SAPS recognises the constitutional right of students to express their discontent in a decent way. However, if that right continues to be abused, the police are obligated to step in and defuse the situation,”  Ntshinga said.

Kinana added: “The use of violent means to address discontent by students is against the law and will not be tolerated by the police.”

The 11 arrested students aged between 18 and 29 were expected to appear in the Alice magistrate's court on Thursday.