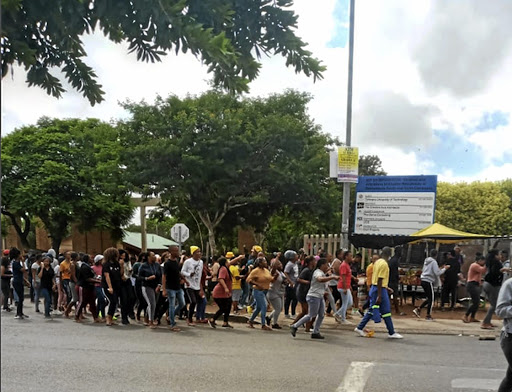 Students at the Tshwane University of Technology have embarked on protests over unpaid monthly allowances and poor student accommodation.

The protests have affected classes for two days in a row as students blockaded the main road near the Pretoria West main campus and the Soshanguve and Garankuwa campuses.

TUT student representative council (SRC) member at the Soshanguve campus, Sizwe Buthelezi, told Sowetan that they were embarking on protests because varsity management had not yet resolved the issues that they had raised.

"There are students who are academically excluded and are not funded. On the other hand, other students have not yet received their allowances but they don't want to put them back in the system. Our [student] residences are not conducive for our students to reside in," Buthelezi said.

He said one of the student residences in Soshanguve could collapse at any time but students were made to live there.

"We want the institution to accredit buildings, demolish certain ones and renovate
others. If they do not respond to our demands the protest will not be as peaceful," said Buthelezi.

The university said it had to suspended all academic activities "due to continuous student protest action at various TUT campuses".

"The University would like to apologise for any inconvenience this may cause and
assure staff, students and external stakeholders that it will work tirelessly to resolve the current issue to ensure students continue with their academic programme," it said.