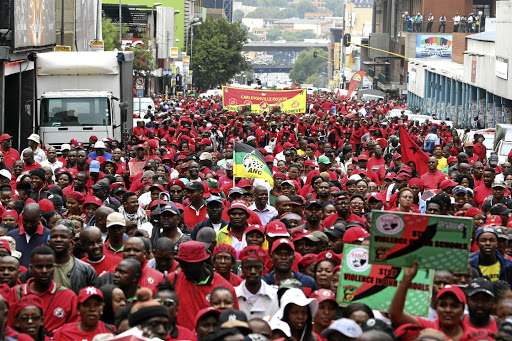 Cosatu and its affiliates marched to the Gauteng legislature protesting against a lack of jobs and retrenchments both in the public and private sector. / Thulani Mbele

The state reached out to the public sector unions at the eleventh hour on Tuesday to renegotiate salary increases in an attempt to reduce the government wage bill.

This is according to unions who said the government negotiators wanted to review an agreement signed in 2018 that would see public servants receiving a salary increase aligned to inflation plus 2% in April. The unions - Cosatu and the Public Servants Association - said they shot down the proposal made ahead of the Budget Speech yesterday.

Cosatu spokesperson Sizwe Pamla said the government must focus elsewhere to save the wage bill and leave workers alone.

He said that finance minister Tito Mboweni's announcement that the government wants to save almost R38bn in wages was merely just him "talking to his friends" the rating agencies.

"They are going to implement this increase. There is no agreement. He was talking to rating agencies and the World Bank and those other people who told him to focus on the public wage bill," Pamla said.

He said if the government was serious about cutting down on wages, they would be looking at things like the use of consultants at municipalities, corporate tax as well as government agencies such as Sassa and Sanral. Pamla said these agencies were unnecessary and were meant to weaken departments.

"That is where money is actually being lost because in these agencies, for example, they have corporate structures. They have boards, they have senior CEOs and COOs who [get] exorbitant perks and on top of that they are losing money, those agencies.

"Look at Sassa, what does Sassa do? Sassa doesn't pay social grants, Post Office pays social grants. If you want to cut costs, incorporate them [agencies] back to the departments so that you remove a corporate structure that is wasteful."