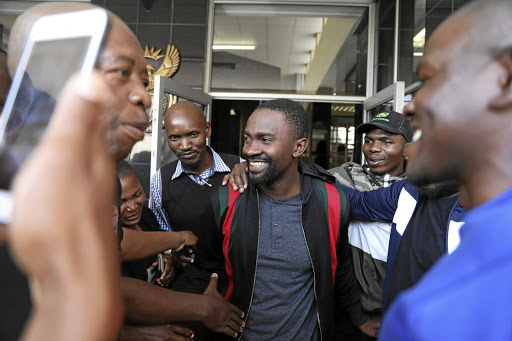 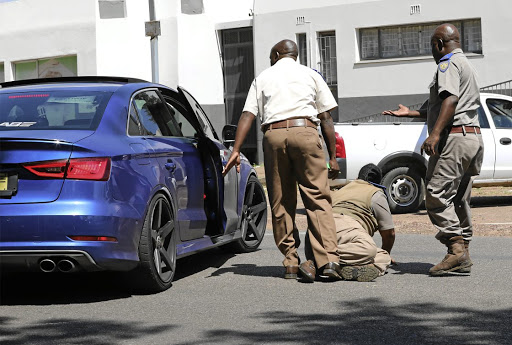 Flamboyant Mpumalanga businessman Sam "Mshengu" Chabalala is again a free man after being granted a R500,000 bail in the Middelburg magistrate's court yesterday.

The day was full of drama as one of Chabalala's associates knocked over a traffic officer after reversing into her at high speed before driving off as the businessman was whisked away in a convoy of four BMWs seemingly in an effort to keep him away from the media.

Chabalala, 25, is facing fresh charges of corruption and bribery. The businessman, who was arrested on February 13, played a cat-and-mouse game with the media that was waiting for him to exit the court following his successful application.

According to a security official at the court, Chabalala was driven out of court with four BMWs and was escorted by several traffic officers.

"They didn't want him to be seen by the media or have his pictures taken. So they used the exit at the back," the official said.

Dozens of his supporters and employees attended the hearing. When in a rush to escort Chabalala away from the court, one car in the convoy hit and knocked down a traffic officer.

In court, Chabalala seemed unfazed, his facial expression not betray any emotion as judgment on the bail application was handed down.

In opposing bail, prosecutor Adv Eric Sihlangu had told the court that Chabalala's real name is Gilbert Tachuona and that he was born in Zimbabwe.

Magistrate Hlengiwe Mkhabela said she granted Chabalala on the strength of him not having interfered with investigations in his other matter.

"The state cannot prove that the applicant is a foreign national. There is no reason to keep him in custody," Mkhabela said.

"The state's submission that he is a flight risk can't be proven. The applicant has strong business and family ties in South Africa. He has also been attending court proceedings and abiding to bail conditions in his other matter. The applicant is aware of how strong a case the state has against him," she said.

Though Mkhabela said she believed Chabalala would not interfere with investigation, he was arrested while on bail, for bribing a police officer to make his first case disappear.

Chabalala's lawyer, Hlau Maluleke, had previously asked the court to consider a bail of R5,000. However, Mkhabela settled for a bail amount of R500,000.

"The bail amount proposed by the defence is an insult to the court. Bail has been set at R500,000." Mkhabela postponed the matter to March 13.

"The department of home affairs has indicated that the applicant obtained a South African ID through misrepresentation," Sihlangu said.

Criminal law expert James Grant said Mkhabela's judgment considered whether Chabalala would attempt to evade justice and whether his release on bail would cause public outrage.

"I believe the presiding officer was led by the overarching principle of him being innocent until proven guilty. She considered whether he would present himself for his trial," Grant said.

Flamboyant Mpumalanga businessman Sam “Mshengu” Chabalala has asked to be granted R5,000 bail in his latest corruption and bribery matter.
News
1 year ago

It took two weeks for the Hawks to arrest flamboyant businessman Sam "Mshengu" Chabalala on new charges of corruption after he allegedly offered a ...
News
1 year ago
Next Article