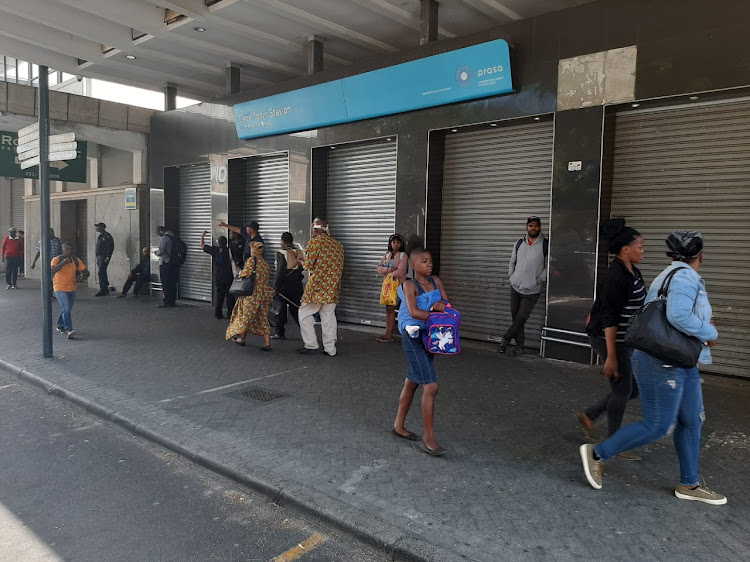 Commuters were stranded when the Western Cape's entire passenger train service was brought to a halt mid-afternoon on Thursday after Eskom cut power to Prasa, citing non-payment of accounts.
Image: Dave Chambers

Prasa on Thursday paid R6.5m to Eskom, apparently ending a “devastating” disruption in the power supply to the passenger rail agency that left thousands of commuters in the Western Cape stranded.

Eskom spokesperson Sikonathi Mantshantsha told SowetanLIVE's sister publication TimesLIVE that the payment was received and the Passenger Rail Association of SA's (Prasa's) account was now “current”. He said power had been restored.

From about midday on Thursday, no trains were operating in the Western Cape after Eskom cut power to Prasa, citing non-payment of bills.

Commuters were stranded on trains which had to limp back to stations on emergency power and passengers were denied entry to train stations.

Prasa said that the trains would not run again on Thursday — but there was no news by 5.30pm whether the service would be back in operation on Friday.

About 590,000 commuters use trains each weekday to get to work and back.

The stream of commuters heading for taxi queues on the station deck seems never-ending on Thursday afternoon. @TimesLIVE pic.twitter.com/J2wi7S26O1

Transport minister Fikile Mbalula said the situation was due to “Prasa-Eskom matters”.

“Prasa has suspended its service,” Prasa's acting regional manager Raymond Maseko told Cape Talk. “This is due to Eskom cutting power to our main supply system in Cape Town, citing non-payment of fees that are due.”

He said the whole Western Cape network was suspended with immediate effect.

“All stations will be closed. No tickets will be sold. Trains are being removed from the section using other means of traction,” Maseko said.

One of the colossal queues for taxis on Cape Town station deck on Thursday afternoon after all trains in the city were halted. @TimesLIVE pic.twitter.com/C0K8BzV5cC

He said commuters who were on the trains when the power was cut were taken to the nearest stations and alternative transport was provided for them.

“Given the devastating affect of Eskom's action in the Western Cape, urgent discussions between Eskom and Prasa executives are under way to find a sustainable solution without further affect on commuters,” Metrorail said in a statement.

Mantshantsha confirmed that Eskom did terminate supply to Prasa in the Western Cape due to non-payment, stressing that it was “not load-shedding”.

“The latest is that we've now restored supply because we have received our cash in the bank. We have been paid this afternoon. The account is now current. We have received R6.5m ... this is the amount in question,” he said.

Asked if there were similar challenges in other provinces — with the threat that Eskom could take the same steps against Prasa elsewhere — Mantshantsha said this would have to be checked with each region as the accounts are handled by officials in those areas.

“Prasa is not paying their bill and it's creating major chaos on a number of our lines. This is devastating. It creates more congestion,” Winde said.

Crowds of commuters head to the Cape Town station deck to catch a taxi home on Thursday afternoon after all trains were stopped. @TimesLIVE pic.twitter.com/AgrtDnJLUb

Train operator Metrorail confirmed on social media that the regional service had been “temporarily suspended”. It said, in a reply to a commuter, that it didn't know when the service would be restored.

About 12.15pm, Metrorail Western Cape tweeted that all trains were at holding stations because of a “loss of overhead electrical power”.

Then, at 2.40pm, it announced: “The regional train service is temporarily suspended due to loss of traction power supply. Further updates to follow. Commuters are advised to make use of own alternative transport.”

The suspension of trains was expected to cause chaos in the city during the peak afternoon commute home as people scramble to find alternative transport.

He was expected to brief the media on Thursday evening.

About 4pm, TimesLIVE witnessed commuters being turned away from Cape Town station.

All of the entrances were closed and a large police contingent stood outside telling passengers: “There is no power, there are no trains, you're not allowed in.”

No trains are operating in the Western Cape after an an Eskom power cut.
News
2 years ago

The Passenger Rail Agency of SA (Prasa) on Friday said it had complied with the Railway Safety Regulator’s directive for train service Shosholoza ...
News
2 years ago
Next Article