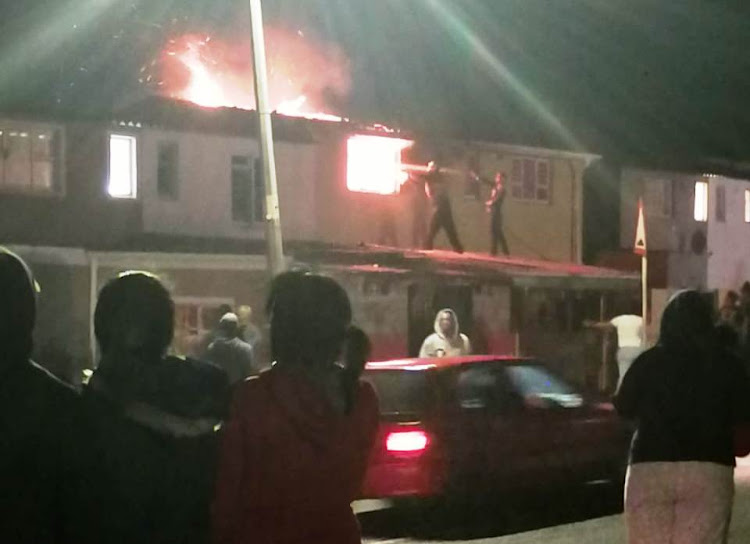 Flames leap from the home of an alleged drug dealer in Ocean View, Cape Town, on February 27 2020.
Image: Supplied

Community members, some of them members of People Against Gangsterism and Drugs (Pagad), marched through the streets after the murder of seven-year-old Emaan Solomons in gang crossfire on Tuesday.

Residents of Ocean View, in Cape Town, watch a fire at the home of an alleged drug dealer on February 26, 2020. @TimesLIVE pic.twitter.com/edwwkOHRH0

On Sunday, community members marched through the suburb warning gang bosses to stop what residents said had been a year of ceaseless violence.

City of Cape Town fire and rescue service spokesperson Jermain Carelse said the first emergency call was received at 1.25am on Thursday. Police escorted firefighters to the scene of a fire at a home in Apollo Way.

“A double-storey dwelling was completely destroyed and the fire was extinguished at 3.11am,” said Carelse.

“While firefighters were at this incident, reports came in of another dwelling in Scorpio Way that was alight and the fire crew from Simon's Town responded. That dwelling was also totally destroyed and the fire extinguished at 3.05am.

“Reports of two other dwellings alight in Alpha Way were confirmed by SAPS, but the fire and rescue service were advised by the South African Police Service not to enter as the area was extremely volatile."

A seven-year-old girl who was caught in crossfire between rival gangs in Ocean View, Cape Town, which also left a 31-year-old man dead, died on ...
News
2 years ago

Police are searching for a gun-toting gang which allegedly held up staff at a chain store in Durban's Musgrave Centre on Sunday.
News
2 years ago
Next Article