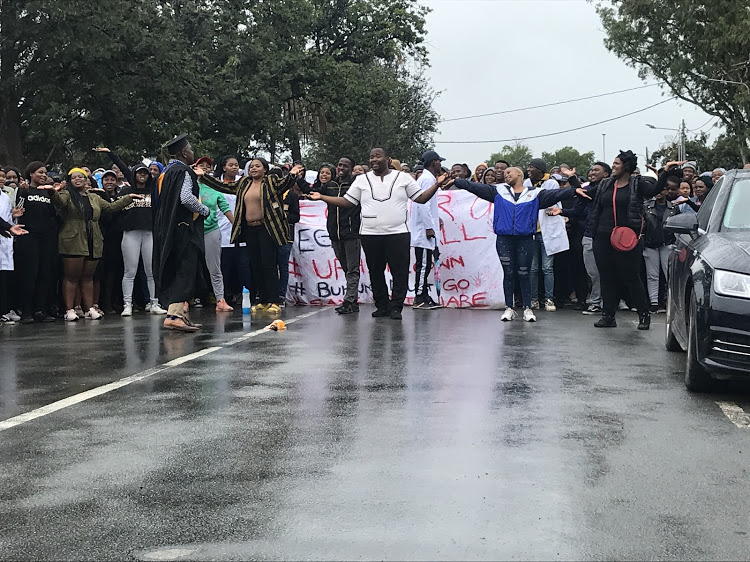 More than 1,000 protesters picketed outside the Alice magistrate's court on Thursday, demanding the immediate release of 11 University of Fort Hare students arrested a day ago.

The 11 accused, aged between 18 and 29, have been charged with public violence and violation of the National Road Traffic Amendment Act, said Eastern Cape provincial police commissioner Lt-Gen Liziwe Ntshinga.

Outside the court, protesters sang and danced while a strong police contingent looked on. The gates of the court were locked and security beefed up.

In the same court, an ANC councillor in the Raymond Mhlaba municipality accused of raping a Fort Hare student was applying for bail.

The 48-year-old was arrested on Saturday after the alleged rape of a 21-year-old student.

The ANC and the EFF in the province have joined hands to show their support for the young complainant.

Among the ANC bigwigs were the party's provincial secretary, Lulama Ngcukayithobni, and ANC MP and former sports MEC Bulelwa Tunyiswa. EFF councillor in the Raymond Mhlaba municipality Siphiwo Mavuso sat next to the ANC leaders.

The cases were to be heard in the afternoon.

A 30-year-old man who was stabbed to death in Alice in the early hours of Saturday was identified as a University of Fort Hare student.
News
2 years ago

A 22-year-old University of Fort Hare male student has been arrested in connection with the murder of 20-year-old Unisa student, Mbasa Hlalukana
News
2 years ago
Next Article