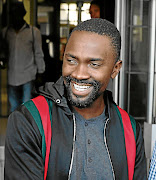 The 25-year-old was granted bail in the Middleburg magistrate court on charges of corruption and bribery.

However, magistrate Hlengiwe Mkhabela said the figure proposed by Chabalala was a slap in the face of the court.

“The bail amount proposed by the defense is an insult to the court. Bail has been set at R500,000,” Mkhabela said.

She postponed the matter until March 13 for further investigation.

Sehlangu said Chabalala was not a suitable candidate to be granted bail as he had been arrested for allegedly committing the same offences that he was out on bail for.

It would not be in the interest of justice for the courts to permit the accused release on bail. He was arrested for offences related to the offences he was out on bail for.

"The conversation, I suspected that he wanted to corrupt me. He told me that he would give me R50, 000 to give him his Mercedes Benz pick-up bakkie with registration Sam 26," Ngwenya said in his affidavit.

He said this amount was given to him on January 12 and he informed his superiors who organised an entrapment operation.

“He said he would gather more money for me to make his case disappear and suggested that he would give me R200,000 in total for it. But he gave me R72,600 and said he would give me the rest at a later stage. But he was arrested at a hotel after he handed over the money. He was also in possession of a further R22,000."

Sehlangu also revealed in court that Chabalala’s real name is Gilbert Tachuona and he was born in Zimbabwe.

“The department of home affairs has indicated that the applicant obtained a South African ID through misrepresentation,” Sehlangu said.