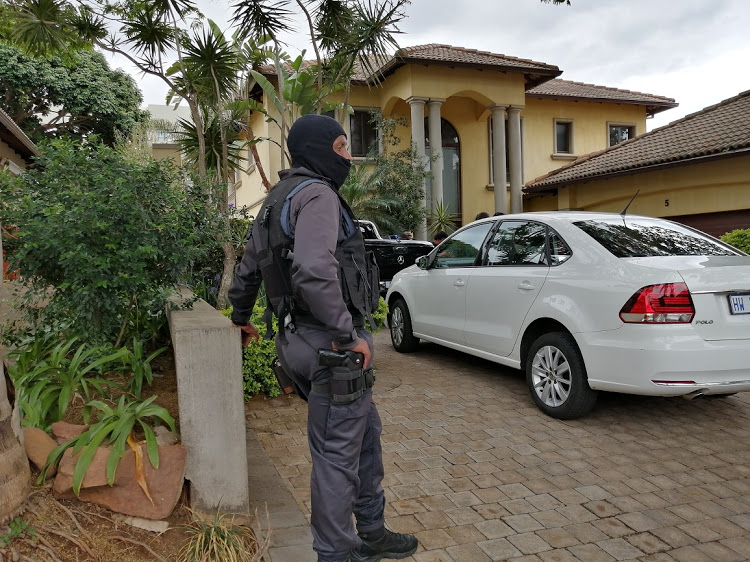 A member of the national intervention unit stands guard during a raid by members of the Hawks and AFU at the plush home of Hlenga Sibisi - accused of bribing an eThewkwini official for tenders - in Umhlanga, north of Durban, on October 10 2019.
Image: Orrin Singh

The state is expected to gather and reveal further evidence in the case of three Durban businessman accused of bribing an eThekwini official and his wife to secure certain tenders with the municipality.

The deputy director of supply-chain management at eThekwini municipality, Sandile Ngcobo, his wife Vuyiswa — who previously held a position at the municipality — and Durban businessmen Mzwandile Dludla, Hlenga Sibisi and Freedom Blose briefly appeared in the Durban Commercial Crimes Court on Tuesday.

They face charges of corruption, money laundering and contravening the Prevention of Organised Crime Act after it was revealed that Dludla, Sibisi and Blose had allegedly purchased a Jaguar F-Pace SUV, valued at R1m, from CMH Jaguar Land Rover in Umhlanga on November 3 2017 for Ngcobo and his wife, in exchange for tenders.

Gumede, the Ngcobos, Dludla and Sibisi are among 11 others in connection with the irregular DSW tender, awarded in 2016. Their arrests emanated from ongoing investigations into the R389m corruption scandal.

The so-called "419" scammers will always find a way of depriving Sowetan readers of their money.
Opinion
2 years ago
Next Article