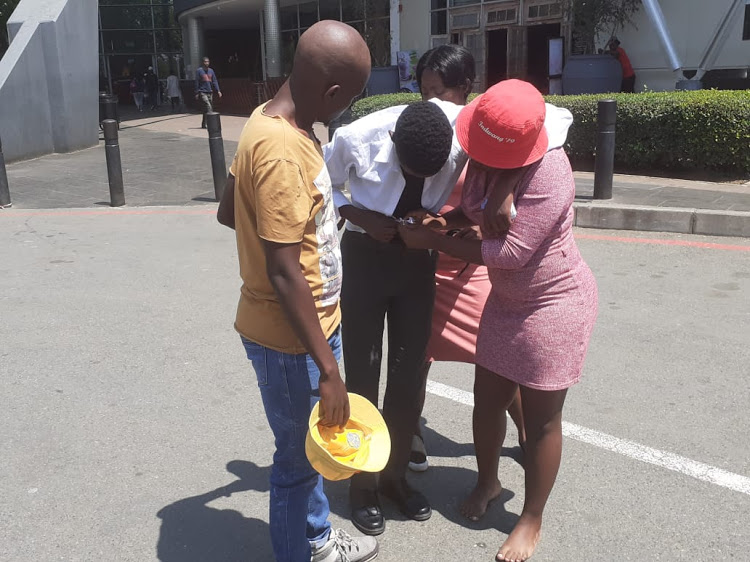 An emotional reunion between mother and son after the boy was found at Maponya Mall in Soweto.
Image: Noxolo Majavu

One can hear pupils chatting and laughing while walking past the school‚ life on the crowded and busy city road continues‚ but somewhere in the classrooms‚ a chair is unoccupied.

Peter Sibanyoni‚ 53‚ is parked inside the school premises waiting to pick up pupils.

This is the man who usually transports the pupil who was allegedly abducted from Queens High School in Johannesburg on Monday. The grade 8 pupil was found safe in Soweto on Wednesday‚ after his disappearance was made public by the Gauteng education department.

Sibanyoni explains that on Monday he left the pupil at the school‚ as he was supposed to participate in sports activities.

“His father drops him off at school every morning and I pick him up and drop him off at home.

“It's not unusual that he would remain. He came to me and told me he's not leaving with me because he had to go to sports‚ and I left.” Ordinarily‚ the driver said‚ his father would fetch him in these circumstances.

“Then I got a call around 9pm that he didn't make it home. I was shocked‚” he said.

'Kidnapped' Joburg pupil reunited with his family at Soweto mall

The Johannesburg pupil who was allegedly kidnapped outside his school two days ago has been found.
News
2 years ago

Sibanyoni said the school went through the CCTV footage and saw that he was with a friend when they requested an e-hailing cab.

“When they spoke to the friend on the footage‚ he said his friend had requested a cab.”

He also said he was a relative of the boy. Anne Pratt‚ 66‚ who lives two houses away from the school‚ was in shock‚ as she did not see anything suspicious on Monday.

“The children are always outside the gate waiting for transport. They normally make a noise and play outside‚ I would notice if something suspicious happened. There was no scream or any struggle.

“I found out on Facebook. I’ve lived here for years and went to the school‚ but I have never heard anything of that sort happening at the school‚” she said.

“It’s as safe as it can be and I guess that’s why the security is a bit lax because no one expects that sort of thing to happen‚” she added.

Atlas Ntloana‚ 72‚ said he used to work at the school as a general worker for years and had never seen or heard of anything similar.

“This place is not bad; the kids normally walk about freely. I only heard this morning‚ but I literally live opposite the school at the retirement village. It’s a very strange thing‚” Ntloana said.

The owner of the tiny tuck-shop across the road from the school‚ which pupils frequent‚ said they broke the news of the alleged kidnapping to him nonchalantly. The man‚ who asked not to be named‚ said school life had been normal despite the incident.

His parents were reunited with the 14-year-old on Wednesday morning at Maponya Mall in Soweto‚ where the boy was found. Police investigations are ongoing.