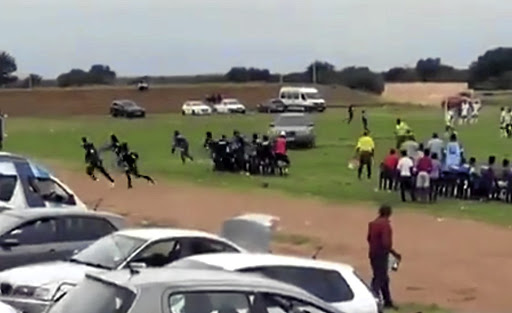 People run for their lives as an unidentified motorist drives his car onto the pitch as he protested against the referee's decision in Brits, North West.

The driver of a SUV who invaded a pitch and attempted to run over players and match officials during an ABC Motsepe League match in Brits, North West, could face charges.

The unidentified man who drove his luxury BMW X5 onto the pitch at a game between Luka Ball Controllers and Polokwane City Rovers in Letlhabile on Sunday, was apparently part of a rowdy group at the match.

Although it was unclear what caused the horror incident that was captured on video, social media users claimed the driver had been unhappy with the refereeing decisions during the game.

Videos of the man driving in high speed onto the field and chasing players went viral on social media yesterday.

The owner of Ball Controllers, who is a former Bloemfontein Celtic player, Kenny Makara, told Sowetan he tried to open a case on Sunday afternoon but the police were not very helpful.

"What happened was attempted murder. I am still in shock because that guy nearly killed us," Makara said.

"We went to the police on Sunday to open a case but officers at the station told us that this is not a criminal case and they only made a report. I was very disappointed but I will go back to try to open a case again."

A video of a luxury SUV driver  who invaded a soccer pitch and tried to run over players and match officials during the ABC Motsepe League match in ...
News
1 year ago

Makara said the man was part of a rowdy group of spectators who were drinking close to the field.

"It started as a group of guys who were drunk and disrupting the game with the shouting from the sidelines," Makara said.

"They were watching and complaining about the officiating.

"One of them who was heavily drunk then decided to take matters into his own hands and drive into the field."

Police spokesperson Sam Tselanyane said he can only comment on a case and not a report.

"If a report was made then it goes to an occurrence book, which means the incident did not have an element of criminality.

"If they feel otherwise I advise that they go back to the police station to open a criminal case," he said.

Makara, who recently bought the North West club, said the game was their third under his ownership.

Rovers were leading 2-1 at the time of the incident. Rovers owner Tyzer Temo said he was traumatised by the incident.

"What happened was very scary and I even start to shake when I think about it," he said.

"This was not a dispute about the match or anything.

"He was also trying to run over the players from Luka, so it seems to us that he was acting on his own."

The ABC Motsepe League has been marred by violence, corruption and criminal acts.

In March last year, the owner of Tornado FC, Siphiwo Nyobo, was shot dead during a game in East London.

Safa North West chairman David Moloantoa has called for criminal charges to be laid with the police against the driver of the X5.

"We urge those who were at the match to lay criminal charges against this perpetrator.

Our disciplinary committee will investigate the matter but our criminal justice system must also get involved," Moloantoa said.

He said Luka Ball Controllers as the home team would be charged for not providing sufficient security.