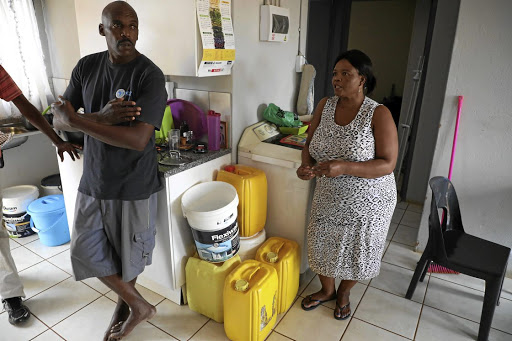 Retired SANDF member Mpho Sejabatho and wife Alice Moagi do not have running water and their Rama City house gets flooded during rain.
Image: Thulani Mbele

Several new houses built for among others, military veterans, are on the brink of collapse.

At least five homes which were handed to former uMkhonto weSizwe members appear to be sinking into the ground in Rama City near Akasia, northern Pretoria.

There are about 200 newly built homes in the area which have no access to water and electricity. About 90 military veterans who include former Apla and Azanla fighters and former SA National Defence Force members are some of the beneficiaries of the homes they moved into last year.

Most of the military veterans concerned were allocated the incomplete houses in October last year and were told that they would soon be attended to.

When Sowetan visited the area yesterday about five houses appeared to be sinking into the ground while others had their electrical wires and pipes stripped off ahead of their occupation.

Andries Mojaki, a retired former SANDF member, said he only spent one night in his two-bedroom house which was slowly sinking into the ground as he took occupation on December 19. 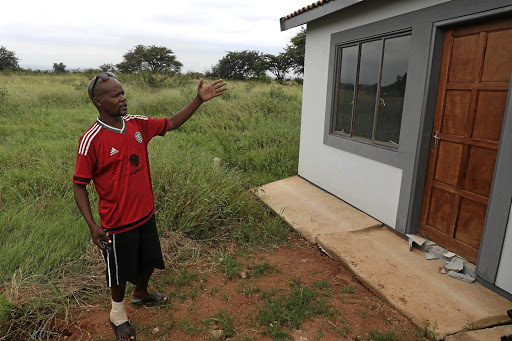 Andries Mojaki, a military veteran, points to his house which is falling apart.
Image: Thulani Mbele

"When I took the keys on November 28, I realised that the soil was sinking at the back of the house but when I came to occupy the house it had already started to sink, I only spent one night because clearly it was unsafe to occupy it," Mojaki said.

Three houses near Mojaki's had parts of their foundation caving into the ground which seemed not to have been properly compacted ahead of construction. The home of Alice Moagi and her ex-SANDF husband Mpho Sejabatho gets flooded when it rains to the extent that water has already damaged their kitchen cupboards.

"Living here is hell; sand falls off our plastered walls as if there was no cement used. Even the taste of water that gets delivered to us is horrible," Moagi said.

Elphus Lephale, an ex-MK member, moved into a house which was stripped of electricity wires.

"I sometimes think that we really fought for sh*t if you look at the conditions we are now living under," Lephale said.

Floods will happen no matter what is done, but building water-sensitive communities and investing in early-warning systems will lessen the impact of ...
News
2 years ago

He said a new contractor was on site to complete internal services and correcting some of the poor work from the previous contractor.

"The completed houses were at risk of being invaded, some were already vandalised, to mitigate this we asked all those beneficiaries who had no problem with moving into the incomplete houses to move in," Sema said. He said the city had informed them that by June 2020 all the work would be completed.

Residents also complained about being settled in a bushy area with no access to healthcare facilities. They also say they feel unsafe from the snakes and even jackals at night.

"I feel like I'm still in the bush, during the armed struggle," ex-Apla member introducing himself as Godfrey said.