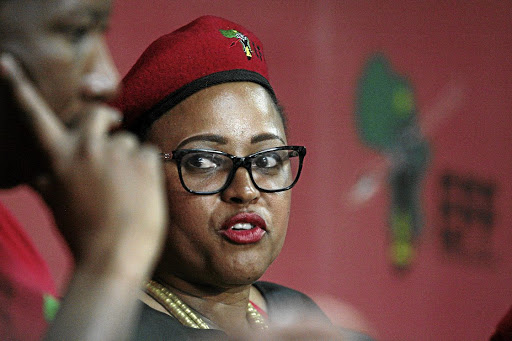 The EFF says its Gauteng leader Mandisa Mashego has not left her position despite her not carrying out her duties in the provincial legislature.

Yesterday, Sunday World newspaper reported that Mashego had resigned as the caucus leader of the party in Gauteng and as a member in the legislature.

But EFF spokesperson Vuyani Pambo said as far as they were concerned Mashego was still an EFF leader in the province.

"Nothing has changed; we have not received anything from her. The last we received from her was a sick note ahead of the plenary meeting where she was excused," Pambo said.

Sowetan has established that Mashego has not been performing her duties as caucus leader of EFF in the legislature since January.

EFF's Mandisa Mashego's decision to contest for the secretary general position at the party's elective conference has seemingly pitted her and Naledi ...
News
2 years ago

Mashego is a member of the portfolio committees of finance and the standing committee on public accounts (Scopa). On February 13, Mashego missed the Scopa meeting in the morning citing health issues but was later seen on television outside the Randburg magistrate's court. She attended the Adam Catzavelos case in which she is also a witness.

In an email dated February 21 her personal assistant Tsibiso Mohlomi sent to the two committees, Mashego indicated she would no longer take part in the meetings due to ill health.

"Kindly remove honourable Mashego from your committee mailing lists for now till further notice. She is currently on sick leave. All relevant communication with regards to committee meetings should be forwarded to my email address," said Mohlomi.

EFF's newly elected top six is without two former leaders Dali Mpofu and Godrich Gardee who have one thing in common - they are both over the age of ...
News
2 years ago

Mashego found herself on a collision path with EFF leader Julius Malema. At the party's elective conference in December, she contested the position of secretary-general that had been earmarked for Malema's close ally Marshall Dlamini.

The EFF student wing, along with MP Naledi Chirwa lobbied for and nominated Mashego for the position.

She lost to Dlamini but said her decision to contest was aimed at being a "little defiant", not against the party but in protection of her democratic right.