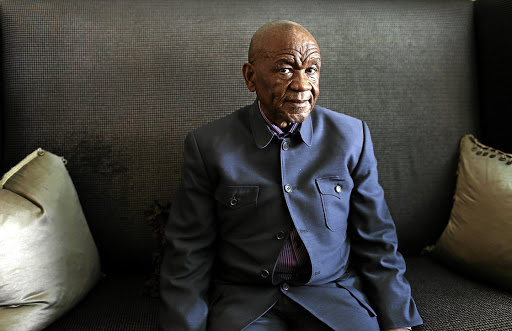 Lesotho prime minister Thomas Thabane has announced he will quit at the end of July. Thabane is set to appear in court today to be charged with the murder of his late wife Lipolelo who was gunned down in June 2017. / ALON SKUY

Lesotho's prime minister Thomas Thabane has been charged with his wife's murder in yet another bizarre twist to the movie-style drama gripping his country.

Thabane, 80, is set to appear in court to face charges of murder of Lipolelo Thabane in June 2017. Yesterday, Lesotho's deputy police commissioner Paseka Mokete told Sowetan Thabane was meant to appear in court yesterday but his lawyer pleaded for more time.

"He is appearing for murder under common purpose," said Mokete, who previously said the police have "a very strong case against Thabane".

The case is unprecedented, even for a country accustomed to frenzied political drama, assassinations and coups.

He is the first sitting prime minister to be charged with a crime in Lesotho. That he will be in the dock for the murder of his wife makes this particularly extraordinary event.

The intrigue, however, doesn't end there. His wife, 'Maesaiah Thabane, is already on trial for Lipolelo's murder. On Tuesday, her trial was postponed to next month to give the police time to arrest eight other suspects.

Thabane also announced yesterday that he is stepping down as prime minister, just as the police were arranging his court appearance. He said his retirement is with effect from the end of July or earlier "if all the requisite preparations for my retirement are completed before then".

His statement was silent on the charges he and his wife are facing.

Thabane couched his exit as a voluntary retirement prompted by his advanced aged, but the reality is starkly different.

He was facing pressure from his party, coalition partners, opposition and public to step down.

A few moments before he threw in the towel, his party's executive committee had told him to immediately resign. The opposition planed a no confidence vote against him in parliament next week and his ruling partners had turned on him.

His wife's charges as well as her reportedly abrasive behaviour only helped deepen the public anger. And his own charge has made his position untenable.

For a man who has been in the echelons of Lesotho's politics for nearly 55 years, Thabane's abrupt fall has been spectacular. It's a story of a once popular felled by matters of the heart.

Thabane met 'Maesaiah, nearly 40 years his junior, through a mutual friend around 2011.

Both were married, Thabane to Lipolelo, but they did not hide their affair.

'Maesaiah stayed in the state house with Thabane during his first stint as prime minister.

She was always by his side during his international trips and public events.

In the meantime, Lipolelo was fighting a legal battle to be recognised as the first lady so she could enjoy the plum benefits. Yet not even her court victory could persuade Thabane to afford her those benefits. When Thabane sued for divorce Lipolelo fought back, arguing that he was trying to end the marriage so he could continue his extramarital affair with 'Maesaiah.

The divorce was never finalised and Thabane lost power in 2015.

Then in June 2017, Thabane returned as prime minister after a fierce campaign throughout with his young girlfriend by his side. The pending divorce case remained a stumbling block to his wedding with 'Maesaiah.

Legally, Lipolelo remained the first lady even though she was estranged from the prime minister. She was also still armed with a court ruling that said she should enjoy the first lady's benefits like an allowance, state cars, an office and aides.

She, however, stopped being a hindrance to Thabane's marriage to 'Maesaiah on June 14 2017, when she was shot dead by several gunmen.

Fingers immediately pointed at 'Maesaiah as someone who had to benefit the most from the murder. Thabane officially became the prime minister three days after the murder and eventually wedded 'Maesaiah two-and-half-month later.

The investigation seemed to be stuck until December when the police asked Thabane to explain why his phone was used to talk to someone who was at the murder scene.

Thabane retaliated by trying to fire the police commissioner but the police blocked him.

In January, 'Maesaiah skipped the country after the police called her in for questioning. She remained on the run until February 5 when she handed herself over to the police and was charged with Lipolelo's murder.

'Maesaiah is also charged with the attempted murder of Thato Sibolla who was in the same car with Lipolelo. She is on bail and had vehemently denied the charges. Now wife and husband are on trial, but the drama is surely far from over.

The murder trial of the wife of Lesotho's prime minister, accused of murdering his previous wife, is set to start next month, a court official said ...
News
2 years ago