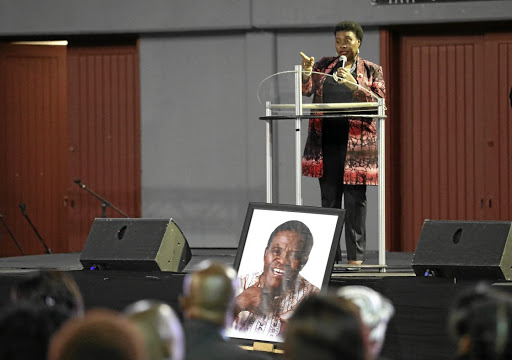 The memorial of the late iconic isicathamiya singer Joseph Shabalala ended abruptly yesterday, thanks to loadshedding.

The service at the Standard Bank Arena in Johannesburg had to be stopped when the lights went off, leaving the venue completely in the dark.

The proceedings ended before the family representatives could speak as Shabalala, 78, was remembered. Apart from a poor attendance, the service began two hours late.

Speakers praised him for his passion for African traditional music and culture.

The groups performances came as a consolation for the event which also started two hours late.
Entertainment
2 years ago

The ceremony will be held this Saturday.
News
2 years ago

Joseph Bhekizizwe Shabalala, 78, was a gentle natured international celebrity with humble beginnings in the countryside.
News
2 years ago

The group even performed some of Ladysmith Black Mambazo hits such as Hallo My Baby. It was followed by Junior Mambazo, a group that was founded by Nkosinathi Shabalala, one of his sons.

Dr Thulani Mbuli, chairperson of the National Heritage Council of South Africa, described Shabalala as genius, lyricist and a philosopher.

"Joseph served our country both locally and internationally. He won prestigious awards from various institutions because his talent could not be ignored. He represented the country well," Mbuli said.

"He popularised it and promoted one of our traditional genres. Ladysmith Black Mambazo was dedicated and promoted the music."

Singer Yvonne Chaka Chaka said she was among the people who benefited from Shabalala's fountain of wisdom.

"He was a real superstar yet he was a father and a leader. I was fortunate to have worked with him. I attended his show at Royal Albert Hall in London and I felt proud. Bab Shabalala continued to love and embrace his culture. He was a humble and respected person."