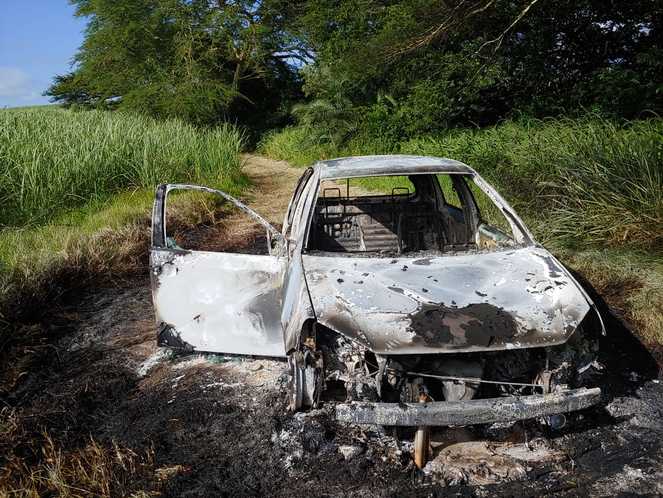 Gareth Toohey’s VW Polo hatchback was found on a farm road near Nyoni, northern KZN, on January 23 2018. Toohey was an admin clerk at the Sundumbili police station
Image: Supplied

Shocking details of how a parolee kidnapped, stabbed and robbed a KwaZulu-Natal SAPS employee of R200 – only to use the money to buy petrol and set him alight – have emerged.

In a statement on Thursday police detailed the gruesome manner in which a 23-year-old parolee carried out the murder of Gareth Toohey, 38, an admin clerk who was employed by SAPS in Sundumbili in northern KZN.

On January 23 2019 police detectives discovered Toohey’s VW burnt out Polo hatchback  in a remote location near the R102 provincial road.

His charred remains were discovered nearby with his hands tied behind his back.

Police spokesperson Capt Nqobile Gwala revealed how Nhlanhla “Sathane” Mhlongo, 23, a man who was out on parole for a robbery committed in 2018, kidnapped and brutally murdered Toohey.

News anchor Xoli Mngambi and his eNCA crew were robbed of their equipment in Mamelodi East, east of Pretoria, on Wednesday afternoon.
News
1 year ago

“Investigations revealed that the deceased was assaulted with a hammer and stabbed with a screwdriver before being set alight. He was also robbed of R200 in cash that was taken from his wallet. The money was used to buy petrol at a service station to set the victim and his vehicle alight.”

Gwala said a detective warrant officer was assigned to investigate the case and conducted a thorough investigation.

“With the assistance of the Gingindlovu detective branch commander, the accused was traced and arrested in the Mangethe area in Mandeni. During the course of the investigation it was established that the accused was out on parole for a robbery case committed in 2018. He was positively linked to the matter and was tried in court until he was sentenced.”

On Tuesday the Mtubatuba high court sentenced Nhlanhla “Sathane” Mhlongo to life imprisonment for murder; 15 years for robbery; five years for kidnapping and five years for malicious damage to property.