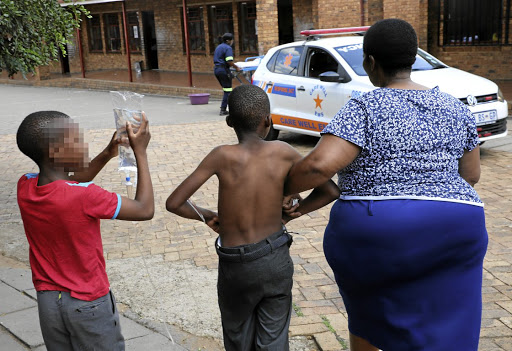 An injured Madibatlou Primary pupil is escorted to safety after their scholar transport was hit by a motorbike in Olifantsfontein yesterday. /ANTONIO MUCHAVE

Devastated Thulani Ndlovu knelt in front of his eight-year-old daughter seated in a wheelchair with cotton on her left ear at Tembisa Hospital.

Ndlovu, 43, was one of the parents who rushed to the hospital after pupils at Madibatlou Primary School were involved in a crash on the M57 (Old Pretoria Road), outside Tembisa yesterday.

His quick reaction was met with sad news, that his first-born daughter Mbalenhle, 14, was one of the two pupils who died at the scene. Their scholar transport vehicle was hit from the side by a motorbike during the morning rush, less than a kilometre from school.

Seventeen pupils were rushed to nearby Tembisa Hospital, where a tearful Ndlovu found his other daughter sitting on a wheelchair. She had injuries to her ear.

"When I left them standing outside our gate, waiting for their transport, it never occurred to me I was saying goodbye to my Mbali for the last time," he said.

"She was with her two cousins and her younger sister and they were all happy. I even passed the transport on my way to work from Kaalfontein (in Midrand) to Sandton. The taxi was still empty and I guess they were among the first ones to be picked up."

It is a sombre day at Madiba Tlou Primary School in Olifantsfontein, near Midrand, as pupils and staff struggle to come to terms with the deaths of ...
News
1 year ago

Gauteng education begins this week on  a sad note with yet another  death of two pupils.
News
1 year ago

Ndlovu's pain was so raw that it was etched in his face, making talking a difficult effort.

"On Sunday evening Mbali told me that she was worried that they will have a new driver and she did not trust him as he had not driven them before. Her passing has deeply hurt me, my sister. She wanted to be a radio presenter."

Another parent Nancy Ramannye, 33, said she was shocked when she heard about the crash as she too had two children in the minibus.

"I received a call from one of the parents who saw the accident while she was on her way to work. I was shocked and scared at the same time for my children who are five and 10 years old. I am glad they are both fine but I am worried about the two who passed away," Ramannye said.

Gauteng education MEC Panyaza Lesufi visited the scene of the accident and the school.

A group of community members held a prayer session at the scene and the blood stains were still visible. At the school paramedics and teachers had their hands full comforting and assisting those who were shaken by the news.

"This is a difficult day for the department, I have no words to comfort the family.

"Since the opening of schools, we have lost 16 pupils and four teachers. We have been told by the hospital that most of the children will be discharged today and there is only one learner who needs serious medical attention. One teacher collapsed when the news were brought to their attention," Lesufi said.