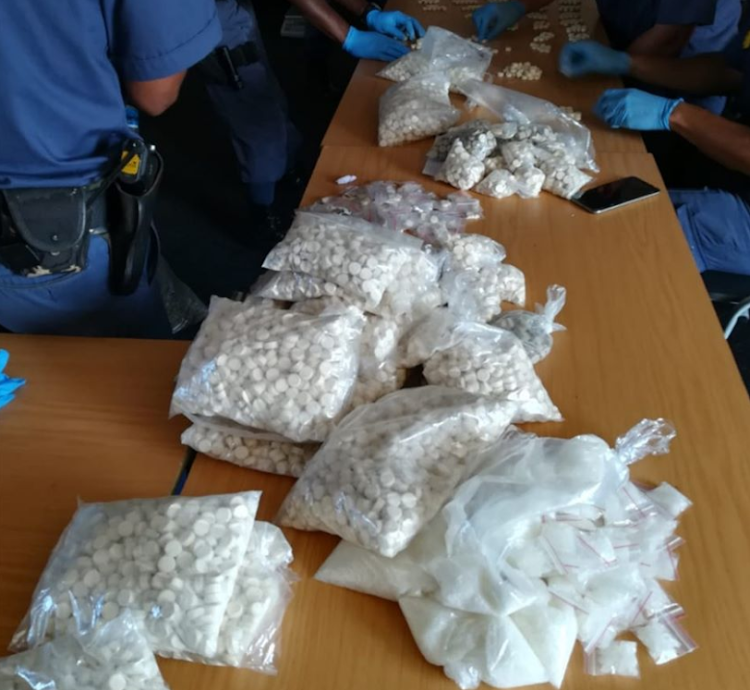 Some of the drugs seized by police at a house in Bethelsdorp.
Image: SAPS on Facebook

A Port Elizabeth teenager has been arrested for illegal possession of drugs worth more than R600,000 and firearms.

The police Anti-Gang Unit, acting on information received, executed a search warrant at a house in Bethelsdorp on Friday morning.

“The unit together with the Tactical Response Team (TRT) and Public Order Policing (POP) thoroughly searched the house inside as well as outside and recovered thousands of Mandrax tablets. A total of 11,604 Mandrax tablets, 1,397 grams of tik and 7,844 grams of dagga were found at the house,” said Eastern Cape police

The sealed packets of Mandrax tablets were found inside the house as well as hidden in strategic places in the yard, they said. The total value of the drugs seized was R623,521.

Two firearms, a 9mm pistol and a shotgun were also found in a bag in the bedroom.

A 16-year-old boy has been arrested after he allegedly shot and killed a 14-year-old boy in a flat in Sophiatown, Johannesburg, at the weekend.
News
2 years ago

Marcel Steyn's warped childhood led to her involvement in a cult and a string of grisly murders.
News
2 years ago

“The shotgun was reported stolen in Ikamvelihle in August 2016 while the serial number of the 9mm pistol has been filed off.”

Other seizures included over R31,670 in cash, three scales, one cellphone, record books, 21 rounds of ammunition and a bag.

“The suspect will appear in the Port Elizabeth magistrate’s court on Monday,” police said.

Provincial police commissioner Lt-Gen Liziwe Ntshinga welcomed the successful drug bust, saying that illegal possession of firearms and drugs was a growing concern and that it was a fact that participation in the drug markets was known to be linked to gangs.

“We cannot and will not stand back and allow our neighbourhoods to be controlled by violent thugs. We will not cede one street or corner to these illicit traders. While we appreciate the information from the law abiding citizens on criminal activities in their neighbourhoods, we urge the communities to stand together with the police in our efforts to create a safe and secure environment for all,” added Ntshinga.