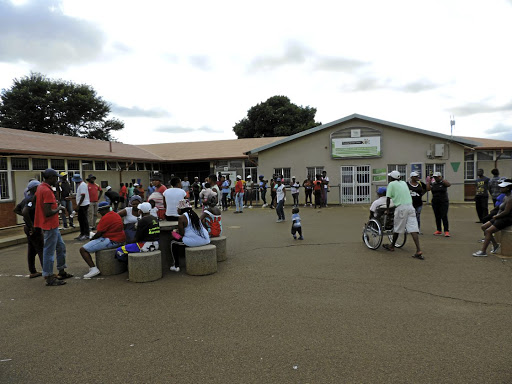 Municipal offices in Mamelodi West, east of Pretoria, have been forced to shut down for two days due to protests by residents of a local informal settlement.

The protests by residents of Nkandla informal settlement were apparently sparked by a recent announcement by the provincial government that displaced flood victims of Eerstefabriek will soon be moved to a vacant land which has been identified.

More than 700 shacks in Eerstefabriek were swept away by floods in December, leaving hundreds of people displaced and they were temporarily housed in several local churches and community centres.

Around 100 protesting locals closed down the municipal customer services centre next to the Solomon Mahlangu Square, disrupting services and blocking its entrance on Wednesday and yesterday.

When Sowetan visited the offices yesterday the protesters, some with their babies on their backs, were blocking the entrance, not allowing any person inside. Tshwane metro police officers were monitoring the protest.

Community leader Vusi Mathebula told Sowetan they were protesting to the municipality in demand for answers.

"There's now land found for them [displaced flood victims] and I also want to be moved there," Mathebula said.

He said they also want to be moved at the same time as the flood victims to the land that government has identified.

Mathebula added that they started the Nkandla informal settlement around 2014 because they lived in back rooms and were also waiting to be
allocated well-suited land by the city.

Mariam Mawela, 33, said their informal settlement was not a conducive place because they had built on a mountain without access to basic services such as water and electricity.

Mawela said it was difficult to raise children in Nkandla informal settlement and they also wanted to be moved to a well-placed area just like the displaced flood victims.

City of Tshwane spokesperson Lindela Mashigo said they were against the disruption of services which was taking place but they would engage with the residents in an effort to resolve the matter.

Meanwhile, Gauteng MEC for human settlements Lebogang Maile's spokesperson Castro Ngobese said a series of meetings will be held with all affected communities once all spheres of government have resolved certain matters pertaining to their intervention in Mamelodi following the flood disaster.

Land grabbers this time confident they are home to stay

It is just 11am at an informal settlement called Anglers - named after the railway station closer to it in Lenasia, southern Johannesburg.
News
2 years ago
Next Article