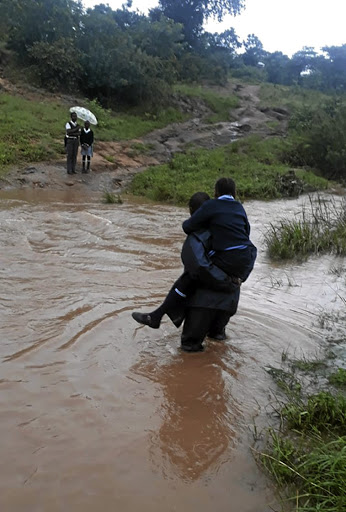 Lazarus Reason Phiri carries pupils on his back across the overflowing Bejani River at Mathibela village in Mpumalanga. /Mandla Khoza

Following torrential rain that hit parts of the country, school children in a village in Mpumalanga were faced with crossing an overflowing river to get to school.

Thankfully, a good Samaritan was waiting to help them cross to the other side safely, and without getting wet.

Lazarus Reason Phiri, a general worker at Alexandria Lower Primary School in Bushbuckridge, said he carried about 60 children across the river on Monday morning.

The children from Alexandria and Motseleng Higher Primary School found him waiting for them again after school.

Phiri, 49, from Mathibela village, said he had been helping children cross the river since 2009.

"My wish is for all the children to get to school alive," he told Sowetan yesterday.

Phiri said he once saved a high school pupil from drowning in Bejani River which made him notice the dangers children faced each day.

At least nine people have drowned and three remain missing in KwaZulu-Natal in the past five days.
News
2 years ago

"This is one thing I decided to do from around 2009 after I was employed as a general assistant at Alexandria Lower Primary School in 2008. We asked for poles from Eskom to create a makeshift bridge for the children to walk on during the rainy season but someone stole the poles," Phiri said.

"I decided that I will carry the children on my back to help them get to school and back each day," said Phiri.

"On Monday, there were about 60 learners. Remember our area is poverty-stricken and these children are benefiting from the school feeding scheme at school so they don't want to miss a day because back home there's no food.

"They will risk their lives so they can get to school and eat. So, I wake up early when it's raining so that when the children come, I take them across one by one before I go to work.

"After school is the same story, I wait for them to get out of school and help them cross over the river so that they can go home," Phiri said.

He said he has been in contact with the local councillor Sabelo Mkhabela to have a bridge built over the river.

"Last week, we met with the Ehlanzeni district municipality and were promised they would bring engineers to find out how the bridge can be built." He said there were other routes to school but the children will have to walk more than 5km, so they risk crossing the river.

Mkhabela praised Phiri's efforts: "I became a councillor in 2018 and have always seen Phiri doing this. We are grateful for what he is doing."

Police have recovered the body of an eight-year-old boy who was swept away by a river in Mount Fletcher in the Eastern Cape last week.
News
3 years ago

The army has been ordered in after six Matatiele children were swept to their deaths in a flash flood on Wednesday.
News
3 years ago
Next Article