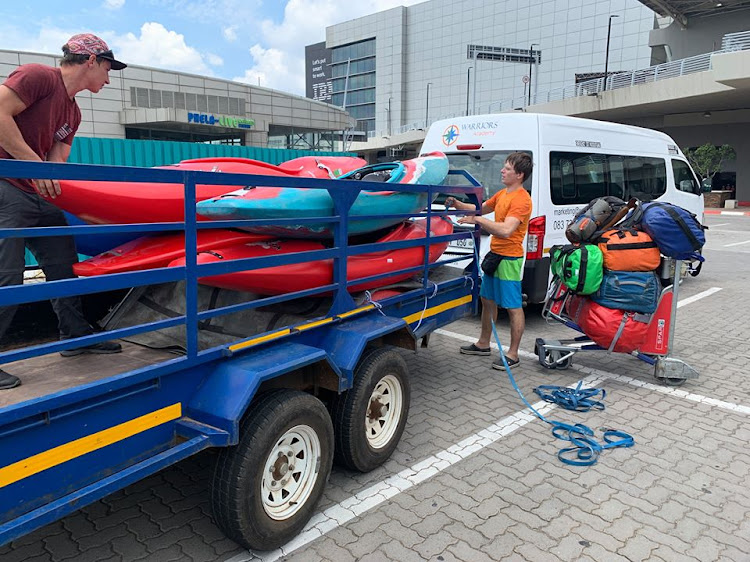 The stolen kayaks included some brands that are rare in SA.
Image: Facebook/Shane Raw

A trailer filled with kayaks worth about R100,000 that was stolen from Russian tourists in Mthatha earlier this week has been recovered in the Eastern Cape.

The trailer was found after a tip-off by a community member, said police spokesperson Col Sibongile Soci.

Police are still searching for other items that were on the trailer when it was stolen.

Tourists 'robbed at knifepoint' near shipwreck on Noordhoek Beach

Three tourists were robbed near the Kakapo shipwreck on Noordhoek Beach in Cape Town on Friday afternoon.
News
1 year ago

Suspect due in court for 'robbing' tourists in Khayelitsha

“Sharing of information plays a pivotal role in solving crime and we urge our communities to work with the police in exposing those who buy suspected stolen property. We applaud the good work from those community members who provide information and tip-offs to the police,” she said.

“We are pleased that the complainant expressed his appreciation for the work done by the police in recovering some of the stolen items”, she added.

Shane Raw, who was helping the tourists with information on where to kayak, said earlier that they had just finished kayaking on the Tsitsa river. Their kayaks were loaded onto the trainer and they stopped in a parking area.

He put out an alert on social media, pleading with community members to help find the rare kayaks which he said were not sold in SA.

“[The post] was shared over 5,000 times by concerned citizens and reached thousands of people across many communities and networks,” he said.

“The outstanding [missing] items include three blue metal trunks full of camping and catering equipment, several fuel canisters and wheels off the trailer,” he said.

Raw said as news of the stolen kayaks went viral that the thieves probably felt the items were “too hot to handle” and dumped them.

The affected tourists returned home just hours before their kayaks were found.

“When they touched down in Istanbul on route home, they received word about the recovery of the stolen goods. Now the process begins to try to get the kayaks and kayaking gear back home to Russia, which will no doubt be a costly exercise,” said Raw.

The billions needed to fix sewage-treatment infrastructure and for maintenance of the Vaal River system would be an investment with the potential to ...
News
1 year ago

Buying grapes from roadside sellers along the N1 outside De Doorns is potentially dangerous.
News
1 year ago
Next Article